VS Battles Wiki
Register
Don't have an account?
Sign In
Advertisement
in: Tier 2, Tier Low 2-C, Tier 2-C,
and 31 more 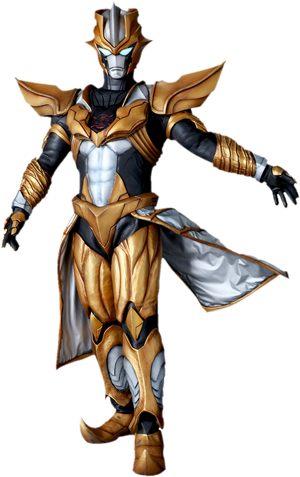 Absolute Tartarus is an Absolutian that serves as the main antagonist of Ultra Galaxy Fight: The Absolute Conspiracy. Using his power to freely manipulate and traverse space-time, Tartarus acts behind the scene as he deploys monsters to attack the Ultras, and disturbs the flow of history by bringing into existence Parallel Isotopes of various threats such Juda and fallen Ultras, Belial and Tregear. With his cunning mind, he pulls the strings in the conspiracy to take over the Land of Light, home of the Ultras.

Attack Potency: Universe level+ (Repeatedly stated to be the greatest threat to the Land of Light, as well as the current strongest villain of the series. After witnessing Tartarus easily defeating Pre-Training Ultimate Shining Zero, Taiga claims that The Kingdom is more powerful than any enemy they have ever faced and wonders if they can even win despite having knowledge on how strong fusions like Reiga are. Fought Joneus while holding back with Joneus himself later on admitting that at present none of the Ultras are capable of defeating Tartarus. Kept up and trade blows with Post-Training Ultimate Shining Zero (Wild Burst). Even while being weakened his energy was stated to be immeasurable by Marlulu and is thus superior to 2nd Form Megalothor whose energy is incredibly high but still readable using GUTS-Select's computer system) | At least Universe level+ (Was going to kill all the Ultras on Planet Blizzard including Ultimate Shining Zero. Stalemated the beam of a casual King who felt the need to step in to save the others), possibly Low Multiverse level (Was possibly the one that erased multiple universes at the beginning of the UCL storyline)

Speed: Massively FTL+ (Was able to keep up with Joneus and Ultimate Shining Zero in close combat)

Durability: Universe level+ (Tanked many attacks from many different Ultras without any major injuries. Quickly got up after getting hit by the Leo-Astra Double Flasher. Survived multiple attacks from Post-Training Ultimate Shining Zero) | At least Universe level+, possibly Low Multiverse level (Should be far more durable than before)

Stamina: High (Repeatedly fought against many experienced Ultras in the span of one day without rest)

Intelligence: Genius (Was able to pull off a conspiracy that threatened to strip the M78 Ultras off their homeworld by operating in the shadows for what could be centuries at minimum, and managed to put them at a roadblock by capturing their princess as bargaining chip)