VS Battles Wiki
Register
Don't have an account?
Sign In
in: Characters, Female Characters, Seinarukana -The Spirit of Eternity Sword 2,
and 21 more 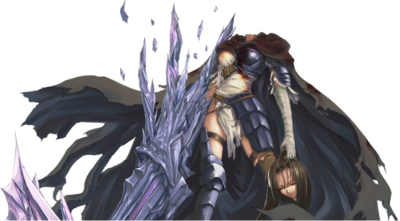 Absolute Law is an Eternal who has lived in the Time Tree since it's creation. She embodies the concept of order within the Time Tree, and maintains its laws and balance.

Age: Existed since the beginning of the multiverse

Classification: Eternal, Master of All Creation

Powers and Abilities: Superhuman Physical Characteristics, Acausality (Type 4; Eternals are freed from the time axis in which they were born, and all memories of them are erased, and history is rewritten so that they never existed within that time axis), Fate Manipulation (Eternity Swords have the ability to manipulate the fate of entire worlds), Immortality (Types 1 and 8. An Eternal will continue to live on so long as the Eternal Divine Sword in their possession, being described as "having no concept of death" and being able to reform even their destroyed bodies so long as they have the sword with them), Conceptual Manipulation (Type 2; As the embodiment of the concept of law and order in the Time Tree, Absolute Law was given the authority and strength by Et Ca Repha to enforce the law and order of the Time Tree), Law Manipulation, Physics Manipulation (Can manipulate the laws of physics), Abstract Existence (Type 1; The souls of Eternals are non-physical and are conceptual things which aren't bound by distance or space. Absolute Law is the embodiment of the concept of order within the Time, and maintains its laws and balance), Power Nullification (Can banish her enemies attacks), Incorporeality, Portal Creation (Can traverse dimensions and go to any world, which allows Eternals to travel to places outside time and space, and to other multiverses), Empathic Manipulation (Can quash the intent to rebel against the Creator. Can also paralyze her opponents with fear. Can compel her opponents to be helpless), Darkness Manipulation, Fire Manipulation, Dimensional Travel, Light Manipulation, Air Manipulation, Water Manipulation, Earth Manipulation, Statistics Amplification, Status Effect Inducement (Can reduce her enemies strength and magic), Resistance to Ice Manipulation, Darkness Manipulation, Empathic Manipulation, Mind Manipulation, Spatial Manipulation, Time Manipulation, Curse Manipulation

Attack Potency: Multiverse level (Embodies the concept of order within the Time Tree, which has thousands upon thousands of branch worlds, each of which are infinitely long. The Time Tree branches endlessly, splitting and uniting many times thus the number of worlds is always changing. Also maintains its laws and balance)

Standard Equipment: Admonition- Her Eternity Sword which allows her to act upon everything within her gaze, with it, and compels her enemies to be helpless.