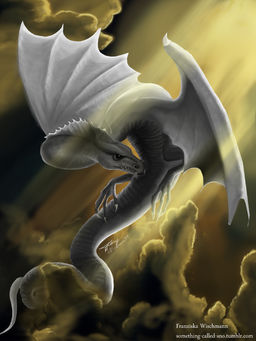 Abraxos is the wyvern belonging to the Crochan Queen, Manon Blackbeak. At a young age, the wyvern was separated from the rest of his kind due to his size and designated as a "bait beast", a living practice dummy for the other wyverns. However, due to his indomitable fighting spirit, the wyvern runt survived for much longer than was expected for any bait beast, fighting back constantly against the other much larger wyverns, including the mighty bull, Titus.

His lucky break would come when the Blackbeak Heir, Manon, was pushed into his cage as Titus was parading. Titus attempted to kill Manon, but Abraxos came to her rescue, helped by Manon freeing him from his chains with her sword. Free at last, the smaller wyvern killed Titus with ease and was claimed by Manon as her steed, the only recognized case of a bait beast being selected as a mount.

Powers and Abilities: Superhuman Physical Characteristics, True Flight, Stealth Mastery (Abraxos can flatten out his wings, gliding practically unseen under the cover of darkness) and Resistance to Pain Manipulation (Abraxos's constant torture has immensely dulled his response to pain), Poison Manipulation (Wyvern poison, consistently referred to as one of the most potent poisons in Erilea, does not have an effect on Abraxos) and Fire Manipulation (Aelin noted that her flames were having little effect on the wyvern)

Attack Potency: Building level (The most powerful wyverns can physically dominate Fae and Valg in single combat, several wyverns comparable to Abraxos could match Lysandra Ennar in sea dragon form, though were notably inferior. Abraxos also destroyed the towers of Ardarlan upon entering the city)

Speed: Transonic flight speed (Abraxos has been stated multiple times to fly faster than the speed of sound) with Superhuman combat and reaction speed (Consistently portrayed as being Manon's superior in combat, who can match Aelin)

Stamina: Extremely high (Abraxos survived for years being used as a bait beast, being bitten, gashed and torn apart every day with little to no rest. Even with rotten teeth, sawed-off tail spikes and torn wings, Abraxos could still fight at his maximum capacity after already being attacked by multiple wyverns. After Manon Blackbeak was injured, Abraxos flew for days across the entire Erilean continent without rest in order to find Aelin)