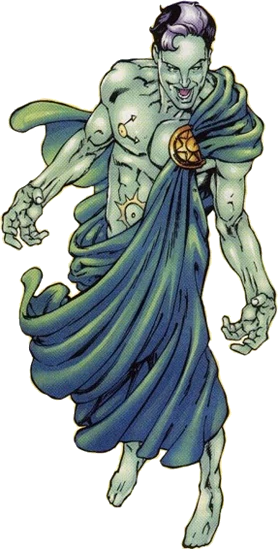 Born from the cosmic being Eternity, Abraxas existed as the embodiment of destruction. Galactus (Marvel Comics) existed to keep him at bay. When the Galactus of universe 616 died it allowed Abraxas to journey through the multiverse killing all other alternate reality versions of Galactus seeking The Ultimate Nullifier as he did to make sure no one would be able to stop him. However he was thwarted when Franklin Richards revived the main 616 Galactus to retrieve The Ultimate Nullifier and defeat Abraxas, which caused a reset of the multiverse.

Powers and Abilities: Superhuman Physical Characteristics, Immortality (Types 1, 5 and 8), Abstract Existence (Type 1), Existence Erasure, Flight, Mind Manipulation, Memory Manipulation (for being able to wipe The Watcher of his memory), Shapeshifting (can turn himself into fire, statues or other materials), Death Manipulation (Killed Reed Richards across all realities), Fire Manipulation, Cosmic Awareness (was immediately aware of the death of 616 Galactus), Teleportation, Nonexistent Physiology

Attack Potency: Multiverse level+ (Able to kill every incarnation of Galactus throughout the multiverse.)

Speed: Massively FTL+ (Able to keep up with the likes of Galactus and Silver Surfer.)

Retrieved from "https://vsbattles.fandom.com/wiki/Abraxas_(Marvel_Comics)?oldid=7010017"
Community content is available under CC-BY-SA unless otherwise noted.