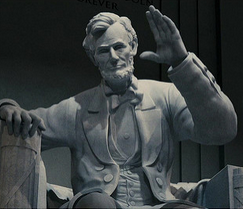 Abraham Lincoln is a character appearing in Night At The Museum 2 wherein he is the Lincoln Memorial statue of himself brought to life. He is first encountered by Larry Daley and Amelia Earhart when they try to seek shelter from Kahmunrah's forces at the Lincoln Memorial and returns later to assist the two in their battle against the aforementioned Kahmunrah.

Origin: Night at the Museum

Powers and Abilities: Superhuman Physical Characteristics, Large Size (Type 1), Inorganic Physiology (Type 1), Immortality (Types 1, 2, and 8; Is alive without organs, a brain, etc. Is granted life by the Tablet of Ahkmenrah, and seemingly will live as long as the museum has the tablet at its location)

Attack Potency: At least Small Building level (Would generate this level of energy through movement, Should massively upscale Larry Daley, Should be much stronger than Sir Arthur, who dominated a Triceratops, who could bust this door

Lifting Strength: At least Class 5 to Class 10 (Is vastly superior to Larry Daley, should be stronger than Rexy)

Stamina: High, possibly infinite (powered by the tablet and doesn't seem to ever require rest)

Weaknesses: Is only living at night and is only alive due to the Tablet and will cease to live if the tablet is turned off, He will presumably be reduced to dust if he were to be away from his original location at sunrise, since that's the case with other exhibits brought to life by the Tablet of Ahkmenrah

Start a Discussion Discussions about Abraham Lincoln (Night At The Museum)