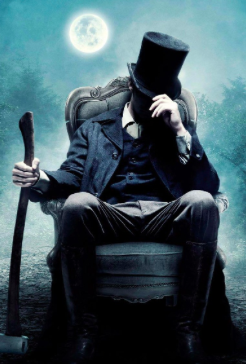 After witnessing his mother's death at the hands of a vampire, this version of Abraham Lincoln grew up possessing a burning desire to avenge his mother's death. His first attempt to hunt vampires began once he grew up, however, it resulted in his failure; fortunately for him, he was rescued from impending death by Henry Sturges. At Abe's request, Henry trained him, turning him into a legendary Vampire Hunter, among the best in the world, in addition to going on to become who the history books knew him as.

Speed: Superhuman (Can keep up with horses)

Lifting Strength: Likely Class 25 (Should be comparable to Henry Sturges who can lift the weight of a train coach, albeit with difficulty)

Durability: Wall level (Took blows from Adam who is comparable in strength)

Retrieved from "https://vsbattles.fandom.com/wiki/Abraham_Lincoln_(Abraham_Lincoln_Vampire_Hunter)?oldid=6904424"
Community content is available under CC-BY-SA unless otherwise noted.