VS Battles Wiki
Register
Don't have an account?
Sign In
Advertisement
in: Tier 7, Tier 7-B, Tier High 7-A,
and 27 more 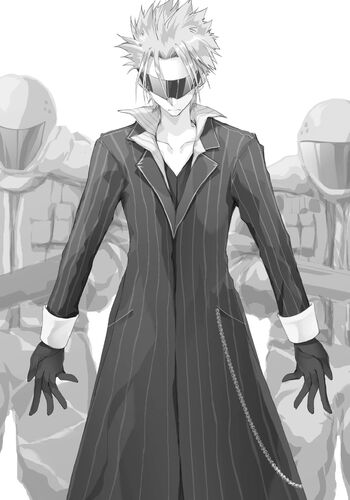 Abraham Carter, otherwise known as Superman, is a magical creature mass-produced by Carl Islands to create the Psyon, a large group of psychics consisting of clones of Abraham that make America 1 of the strongest country in the world.

Powers and Abilities: Superhuman Physical Characteristics, Immortality (Type 2, likely 3. Had no reaction to and continued fighting after being sliced in the throat, heart and getting decapitated due to not being alive), Inorganic Physiology (He is a magical creature), Magic, Expert Boxer, can use magic to boost his physical stats and create a barrier around himself, Weapon Creation (Can summon his device which consists of a pair of silver gauntlets), Body Puppetry (Can force people to obey his commands), Mind Manipulation (Can brainwash people and use his electricity to short circuit their brain), Fire Manipulation, Soul Manipulation (Said to be able to manipulate souls), Clairvoyance and Extrasensory Perception (Could check the situation at the base while being inside the torture room), Electricity Manipulation, Teleportation (On both himself and others), Precognition, Telekinesis, Illusion Creation and Sleep Manipulation (Using hypnosis he puts people in a sleep where they dream of how they wish the fight to go. This effect is broken if the affected target gets hit), Explosion Manipulation, Body Control (Can change the composition of his body), Telepathy, Resistance to Extrasensory Perception (For his Telekinesis), Immunity to Soul Manipulation (He is a lifeless magical creature with no soul), likely Pain Manipulation (Due to being just a magical creature he shouldn't be able to feel pain. Had no reaction to being affected by Oreki's Violet Pain)

Speed: At least FTL (Comparable to Ouma), likely higher (Could fight although unevenly against Torajirou and Edelweiss)

Stamina: Very High (Stated to be comparable to A-Rank blazers), possibly unlimited (Is a magical creature and was compared to a machine, it's unknown whether he can experience fatigue)

Range: Varies with abilities. Up to 5 kilometers with Teleportation

Standard Equipment: His device, Gospel, a pair of silver gauntlets

Intelligence: Unknown, is capable of working extremely well in groups however and developing strategies and counters to opponent's attacks

Notable Attacks/Techniques: Esper: Abraham's ability as a Psychic, which grants him a multitude of abilities: