VS Battles Wiki
Register
Don't have an account?
Sign In
Advertisement
in: Tier 9, Tier 9-C, Tier 7,
and 27 more 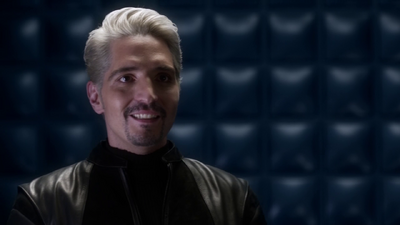 Abra Kadabra is a villain in the third season of The Flash.

Although he poses as a magician, Abra Kadabra is in truth using technology of the future for his tricks and "sorcery". When Abra Kadabra is captured by the Flash (CW), he offers to reveal the identity of the evil speedster Savitar to him if Barry lets him go.

Powers and Abilities: Technological Manipulation (Has been augmented with nanotechnology from the 64th century, which is so versile and advanced it is indistinguishable from magic and sorcery in the 21st century. Can also command various forms of technology), Energy Manipulation and Projection, Telekinesis, Illusion Creation (Can project holograms from thin air, even when he is not in the vicinity), Creation (Can create objects like playing cards out of nowhere), Limited Light Manipulation (Generated a burst of bright energy to briefly blind and distract Barry), Explosion Manipulation (Can cause machines to explode with his technological powers), Water Manipulation (Used his powers to fill a tank with water with a snap), Attack Reflection (Reflected Cisco's blasts), Duplication (Created a clone made of energy to escape from custody), Transmutation (Turned a building into an obelisk), Teleportation (For himself and others. Teleported two security guards in a glass box), Time and Dimensional Travel, Skilled Tactician and Strategist, Expert Engineer, Stealth Mastery, Resistance to Psychometry (Gypsy stated that his powers makes him "invisible" to Vibers like her and Cisco)

Attack Potency: Possibly Street level physically (His physical AP should be comparable to his durability), at least Street level, likely Small City level via his powers (Has fought and defeated Gypsy in the past and managed to kill other Vibers, including her lover, who shouldn't have been much weaker than she is)

Durability: Street level (Endured a burst of energy from Gypsy and got up without being really harmed afterwards)

Intelligence: High. Has enough experience with 21st century technology to construct a Timeship, knowing what pieces he needed and where to get them. Is a skilled strategist who knows how to use his powers to trick his enemies and managed to escape from Gypsy in the past.

Weaknesses: Power-dampening tech, as his powers appear to operate similar to those of meta-humans, otherwise none notable