VS Battles Wiki
Register
Don't have an account?
Sign In
Advertisement
in: Tier 6, Tier High 6-C, Marvel Comics,
and 19 more 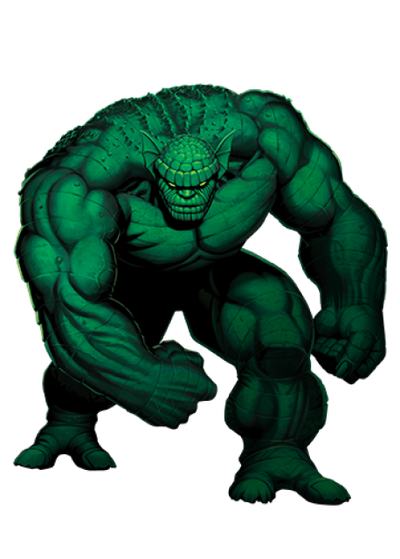 The Abomination (Emil Blonsky) is a fictional supervillain appearing in published by Marvel Comics. The character first appeared in Tales to Astonish #90 (April 1967), and was created by writer Stan Lee and artist Gill Kane, to be the rival of the Hulk.

Debuting in the Silver Age of Comic Books, the Abomination has been featured in other Marvel-endorsed products such as arcade and video games, animated television series , and merchandise such as action figures and trading cards, and the 2008 film Incredible Hulk where he was portrayed by Tim Roth.

Powers and Abilities: Superhuman Physical Characteristics, Martial Arts, Weapon Mastery, Self-Sustenance (Type 1, is okay in space[1]), Vibration Manipulation (His fight with Hulk shook surrounding mountains.[2] Their fights also get a reading of 3.7 on the Richter Scale.[3] His attacks sent tanks and people flying[4]), Limited Resistance to Status Effect Inducement (Recovered from an anasthetic several hours than predicted[5]), Resistance to Electricity Manipulation (Shown here[6]), Fire Manipulation (Is alive after this[7]) and Disease Manipulation (Can live and swim in the sewer[8])

Attack Potency: Large Island level (Consistently[2] portrayed as[3] comparable to[9] the Hulk and can damage the likes of[7] She-Hulk, a weakened[10] Silver Surfer and[6] Wonder Man)

Speed: Subsonic+ travel speed (Travelled from New York to Maine in less than an hour[11]. Jumped 4 miles in 9 leaps[4]) with at most Massively FTL+ combat speed (Keeps up with Hulk)

Durability: Large Island level (Can take[12] hits from[7] She-Hulk and[6] Wonder Man, alongside[13] Red Hulk and the[14] Hulk. Tanked energy attacks from both[15] Modern Captain Marvel and Mk. 49 Iron Man)

Stamina: His advanced musculature give him superhuman stamina. He can physically exert himself to his peak for several days before growing physically tired.

Range: His great size and height gives him a reach advantage in melee combat. At longer ranged combat he usually throws heavy objects at his opponents, causes collateral damage such as punching or stomping the ground and creating earthquakes and shockwaves, or he can also cause shockwaves by clapping his hands together.

Intelligence: Above Average. Abomination is fairly intelligent, since he was a skilled spy before he was transformed. He also seems know some hand-to-hand techniques, being a former military man.

Weaknesses: No known weakness, except for arrogance and overconfidence.