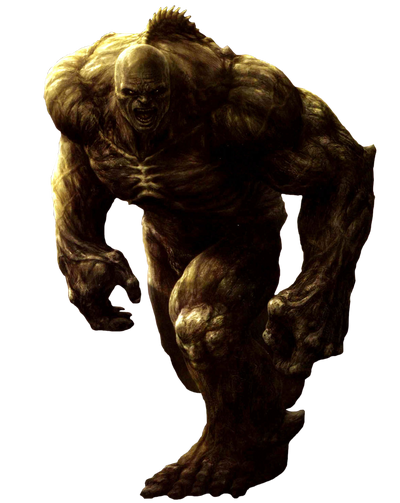 Emil Blonsky was a special-ops commando with the British Royal Marines on loan to General Thaddeus Ross in his efforts to capture Bruce Banner better known as Hulk. Blonsky was injected with a small dose of the mothballed original Super Soldier Serum and later was injected with Bruce Banner's blood causing him to transform into the Hulk-sized Abomination. The Abomination proceeded to go on a rampage in Harlem until he was defeated by Hulk and captured by the United States Armed Forces.

Age: 45 in The Incredible Hulk

Lifting Strength: Athletic Human (Lifted a full-grown man with one arm. Effortlessly threw aside human beings) | Unknown, but likely Class M (On par with The Hulk)

Durability: At least Athlete level, possibly Wall level (Withstood a sonic cannon. Took a punch from a not-so-angry Hulk and survived despite being tossed hundreds of meters away, but can be considered as Plot Armor) | Large Town level (Tanked hits from The Hulk)

Weaknesses: Due to the difference of the Super Soldier Serum, Blonsky does not have Captain America's superhuman strength, speed and durability. However, he does has superior agility and regeneration. | None notable