VS Battles Wiki
Register
Don't have an account?
Sign In
in: Characters, Evil Characters, Fantasy Characters,
and 44 more 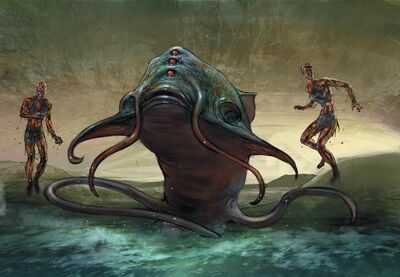 Aboleths are ancient, primordial entities that have existed since the creation of the multiverse, supposedly being spontaneously created when the empty void of reality was touched by an alien entity in the Far Realm, allowing the Aboleths to bleed into the multiverse. They formed an empire throughout the void through sheer psionic might, being the gods before gods came to be- though the dawn of these creatures, the gods as we know them, caused the Abolethic Sovereignity to crumble.

Aboleths maintain the unique trait of ancestral memories- the memories of all past Aboleths are present in the minds of all new specimens. Each Aboleth is spawned with the memory of their grim defeat at the hands of these so-called gods. In the dark recesses of the planes where water exists, Aboleths are too, enacting their will like gods.

The Aboleths resent the gods, and instead largely worship Demon Lords such as Jubilex (a fellow enemy of the gods) or Elder Evils, creatures designed to inherently defy and reverse the sanctity of the deities that defeated them in ages past.

The species has become one of the many iconic creatures of most Dungeons and Dragons setting, being fear and madness incarnate. They are incredible and cruel predators and have featured in many D&D-related media, including a series of novels based purely on the creatures' society, many iconic dungeons such as the Tomb of Annihilation, and in video games such as Neverwinter.

Age: Incalculable for most

Powers and Abilities: Superhuman Physical Characteristics, Memory Manipulation (Maintains ancestral memories, so each Aboleth maintains the memories of all of its ancestors since before time and the gods were created; they are capable of reliving these memories at will), Magic, Reality Warping, Underwater Breathing (Type 1), Large Size (Type 0, possibly Type 1), Mind Manipulation, Enhanced Senses, Non-Physical Interaction (Magic in D&D can interact with conceptual, intangible, incorporeal, abstract, or even nonexistent beings), Perception Manipulation via Hypnotic Pattern, Curse Manipulation via Enslave, Illusion Creation via Persistent Image and others, Transmutation (An Aboleth's slime can transform others into a mucus-like lifeform that must be in water or will suffocate), Telepathy, Life Absorption (An Aboleth can drain the psychic energies of a target and heal itself with them), Immortality (Types 1 and 9, a slain Aboleth can reform on the Plane of Elemental Water), Water Manipulation, Rage Power, Corruption (Type 2) of Water, Duplication via Illusory Double | All previous abilities plus Forcefield Creation via Wall of Force, Afterimage Creation via Displacement, Invisibility via Greater Invisibility, Extrasensory Perception via Detect Magic, Sound Manipulation via Alarm, Empathic Manipulation via Charm, Sense Manipulation and Sleep Manipulation via Color Spray, Energy Projection and Homing Attack via Magic Missile, Statistics Amplification via Fox's Cunning and others, Darkness Manipulation, Magic Nullification, Flight, Electricity Manipulation via Lightning Bolt, Clairvoyance via Scrying, Fear Manipulation via Phantasmal Killer, Damage Reduction via Stoneskin, Paralysis Inducement via Hold Person

Stamina: Superhuman, comparable to Adventurers who can continue fighting through lethal wounds such as lost limbs | Superhuman

Weaknesses: Unable to function properly outside of water