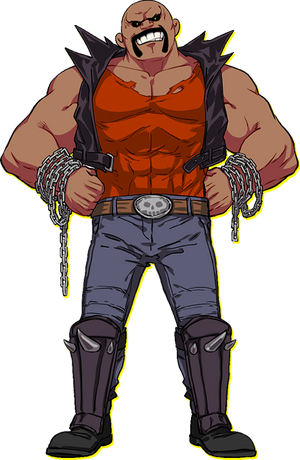 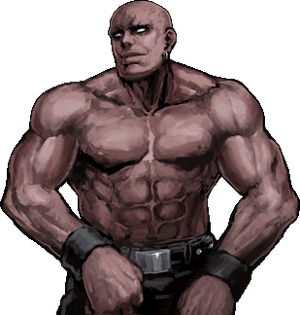 Abobo is a recurring enemy character in the Double Dragon series, usually serving either as a miniboss, the end boss of an area or on few occasions even as a minor antagonist. He is normally depicted as a tall and bald strongman.

Powers and Abilities: Superhuman Physical Characteristics, Expert on street fighting, Weapon Mastery (While he doesn't often use weapons, he can make use of oil drums by throwing them at opponents), Vacuum Breath (Can inhale to pull his opponents to come close. Can also generate air pressure attacks), Limited Vibration Manipulation (Can punch ground and wrecks the entire floor of the room with shockwave that can send people fly above), Energy Manipulation (Can produce three ground-traveling energy waves with a fast thunderclap. Can release energy from his hands while doing Crowd Conttol), Rage Power (Via some techniques like Grand Smash/Pressure Bomb/Earthquake), Afterimage Creation (As seen in the Neo-Geo game)

Speed: Superhuman with Supersonic reaction/attack speed (While mostly slow even at running, can keep up with characters like Billy Lee and Kunio)

Intelligence: Above Average (Trains frequently to polish his skills. Knows how to play the guitar and plays in a band with friends. Almost worked as security for a popular musician Noize, before he got beat up. Gained a degree in physics. Eventually became the principle of River City High School)

Standard Tactics: Relies on his massive size to give him an advantage and intimidate opponents. His long limbs gives him an advanced reach to strike foes that others wouldn’t be able to hit. His sheer muscle makes it impossible for small opponents to grapple him. Likes control of his area, using wide swipes to knock opponents away if they are too close. Uses charges and leaps to close the distance between him and fleeing foes. Tries to use the strongest attacks possible to finish fights quickly. Is a natural grappler who does major damage once he grabs hold of a foe.

Retrieved from "https://vsbattles.fandom.com/wiki/Abobo?oldid=7013729"
Community content is available under CC-BY-SA unless otherwise noted.