VS Battles Wiki
Register
Don't have an account?
Sign In
Advertisement
in: Tier 8, Tier 8-C, Tier 6,
and 14 more 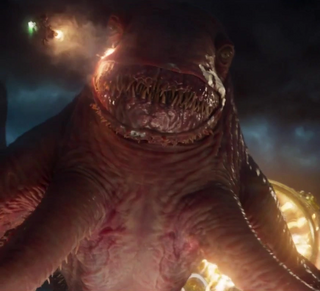 The Abilisk is a interdimensional tentacled monster who was devouring the power sources of the Sovereign planet. The Sovereign hired the Guardians of the Galaxy to fight it.

Powers and Abilities: Superhuman Physical Characteristics, Absorption (Attempted to consume the Annulax batteries, which are the main power source for the Sovereign planet), Self-Sustenance (Type 1), Weather Manipulation, Portal Creation and Dimensional Travel (Can travel between dimensions and generate storms wherever it goes), Heat Manipulation, Breath Attack, Energy Manipulation and Projection (Can shoot energy blasts from its mouth that on contact with something instantly burn it), Extrasensory Perception (Found the Annulax batteries from another dimension), Large Size (Type 1) and Natural Weaponry (Tentacles and Teeth)

Speed: Superhuman movement speed with Massively Hypersonic+ combat and reaction speed (Comparable to the Guardians of the Galaxy)

Durability: At least Building level (Unaffected by multiple blasts from Rocket, Star-Lord and Gamora, its hide is so thick that it could withstand Drax's attacks from inside[1]), possibly Multi-City Block level (Gamora didn't believe she could stop the Abilisk with her sword, which can kill an Asgardian)

Weakness: Has a cut on its neck where its durability can be pierced.