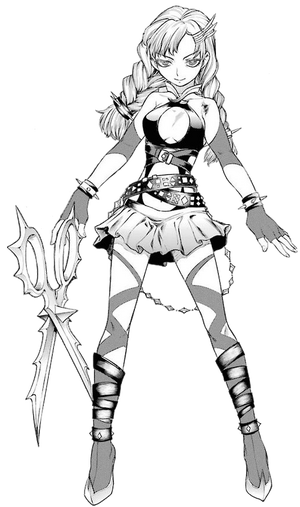 Abigail is an illegal magical girl and part of the mysterious faction known as Babel Brigade.

Durability: Building level (Comparable to Asuka and Kurumi, her magic shield is stronger than an improved Halloween-class', with regular Halloween-classes' magic shields being able to tank multiple 120mm APFSDS shots before being breached)

Magical Girl: Abigail has become a magical girl by synchronizing her brainwaves with a fairy from the Spirit World, a parallel world to the Human World. Her physical characteristics are boosted to superhuman levels, and she can use magic. She can transform into a magical girl by using a magic item unique to her that turns into her magic weapon once transformed. Abigail's magic item is a pair of scissors.

Retrieved from "https://vsbattles.fandom.com/wiki/Abigail_(Magical_Girl_Spec-Ops_Asuka)?oldid=4105738"
Community content is available under CC-BY-SA unless otherwise noted.