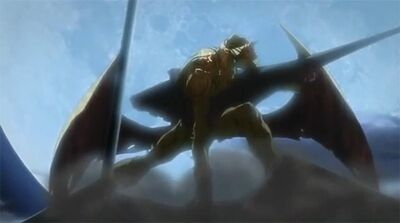 Abigail is a powerful demon mentioned in the Devil May Cry: The Animated Series who is said to have once rivaled the Demon King himself.

Superhuman Physical Characteristics, Immortality (Type 1 and 3), Self-Sustenance (Type 2), Weapon Mastery, Unholy Manipulation, Magic, Energy Blasts, Can create spikes out of his body, Large Size (Type 1), Summoning, Portal Creation, Regeneration (Low-High, regenerated from being reduced to a puddle of blood), Size Manipulation (Can become giant), Likely Possession (Scales from the weaker demons, who have all shown multiple times to be able to possess inanimate and living things), Fear Manipulation and Empowerment (The mere presence of demons causes fear, can also feed off despair and get stronger from it)

Resistant to the Following: Mind Manipulation, Reality Warping, Transmutation, Size Manipulation, Petrification (Demons are stated to be resistant to the Beastheads assimilation process, which includes those abilities), Soul Manipulation (Scales from other demons, who can handle going through the crust of the demon world, which is stated to turn souls into monsters), Corruption (Type 3. Can breathe on demonic air, which turns normal people into monsters), Madness Manipulation (Type 3, endured being in the Demon World, which causes despair and insanity), Disease Manipulation (Approaching the Demon World, being inside or near a Demon World nexus causes "unearthly illness" which makes it difficult to concentrate and causes intense nausea and dizziness) and Fear Manipulation (Feeds of despair, can be around other demons, and their presence can cause fear)

Attack Potency: Mountain level (Easily created a portal that engulfed a portion of the planet) | Likely Universe level (Lower tiers demons are recurrently shown and stated to be unable to control or obtain large portions of stronger Demons' powers due to the rejection of their humanity, which implies that Sid only managed to obtain a small fraction of Abigail's power. Is said to have once rivalled Mundus in the past)

Speed: At least Massively Hypersonic+ with at least Relativistic+, likely FTL Combat and Reaction speed (Comparable to Dante, who could block and dodge the Damned Rook Laser) | At least FTL (Should be comparable to Mundus)

Range: Extended melee range. Tens of kilometres with his abilities.

Retrieved from "https://vsbattles.fandom.com/wiki/Abigail_(Devil_May_Cry)?oldid=6984184"
Community content is available under CC-BY-SA unless otherwise noted.