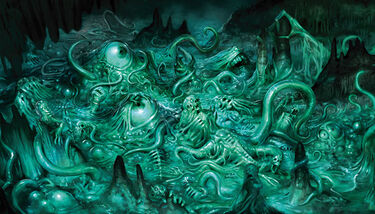 Abhoth is one of the Outer Gods, residing under Mount Voormithadreth. It is an amorphous grey mass, which constantly produces various horrors and re-absorbs them into itself. Thought to be another form of Ubbo-Sathla.

Name: Abhoth, The Source of Uncleanliness

Attack Potency: Outerverse level (Like all the Outer Gods, Abhoth exists far above the concept of dimensions, and is far more powerful than even the strongest Great Old One)

Retrieved from "https://vsbattles.fandom.com/wiki/Abhoth?oldid=6049432"
Community content is available under CC-BY-SA unless otherwise noted.