VS Battles Wiki
Register
Don't have an account?
Sign In
Advertisement
in: Tier 4, Tier 4-A, Characters,
and 55 more 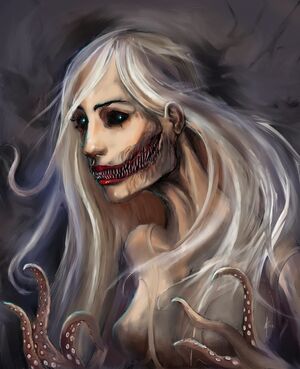 Abeloth, also known as the Bringer of Chaos and Beloved Queen of the Stars, was a being very powerful in the dark side of the Force. She first lived as the Servant, a mortal woman who served the powerful Ones on an unknown jungle planet over a hundred thousand years before the Battle of Yavin. Throughout her life, she became the Mother: she kept the peace between the Father's warring Son and Daughter and became a loving part of the family.

But she was still mortal—she grew old while her ageless family lived on—and she feared she would lose her precious family. In a desperate attempt to hold onto the life she so loved, she drank from the Font of Power and bathed in the Pool of Knowledge. Her actions corrupted her, transforming the Mother into the twisted, immortal entity known as "Abeloth".

Name: Abeloth, The Mother, The Bringer of Chaos

Powers and Abilities: Superhuman Physical Characteristics, Reality Warping (Her control over the Force is greater than that of any other being in the Star Wars Universe, except for The Father. Capable of bending and tearing the fabric of the universe and warping/reshaping the galaxy in any way she sees fit), Spatial Manipulation, Precognition, Life Manipulation (Can manipulate the Force and drain others of their life energy to empower herself), Clairvoyance, Telepathy, Psychometry, Telekinesis, Mind Manipulation, Memory Manipulation, Illusion Creation, Pocket Reality Manipulation, Duplication (Can make copies of herself or convert others into extensions of her own being), Energy Manipulation, Forcefield Creation, Force Lightning, Empathic Manipulation, Flight, Dark Healing (Can forcibly hold her own body together with Dark Healing in the face of extensive damage), Immortality (Types 1, 3, and 6), Intangibility, Incorporeality, Matter Manipulation (Able to phase through matter and fuse materials with on the molecular level through telekinesis), Possession, Regeneration (High-Mid), Shapeshifting, Soul Manipulation (Can absorb or consume victim's souls, drain their life force, and steal or possess their bodies), Teleportation (Can bend space to instantly move between two places with the Fold Space technique), Limited Time Manipulation (Can view events in the past, present, or future before or after they happen and change other's perceptions of them), Weather Manipulation (Can force chains of volcanic islands to erupt, create massive electromagnetic storms, cause lightning to strike at targets she chooses or wills at, and shift a planet's tectonic plates), Astral Projection, Can sense the presence of others through the Force, Can empower others with enhanced stats or even give them specific abilities they never knew or were incapable of learning from across a galactic distance while being sealed and contained on a singular planet away from them, Cosmic Awareness (Bathed in the Pool of Knowledge), Abstract Existence (Is a cosmic force entity embodying both the Light and the Dark), Life-Force Absorption (Via Force Drain),

Attack Potency: At least Multi-Solar System level, likely higher (Her power surpasses the combined might of The Daughter and The Son. At full power, she could potentially "literally reshape the galaxy in any manner she wished". Repeatedly stated to be capable of laying waste to the galaxy and bringing an end to the galactic civilization. She should be massively stronger than Darth Sidious and Vitiate and was said to be at least 12 times stronger than Jedi Grandmaster Luke Skywalker)

Speed: At least FTL+ (Faced both The Son and The Daughter in combat. Nanoseconds are considered slow to her), augmented by precognition; Massively FTL+ travel speed (Can traverse the galaxy/universe on her own); can instantly move between any two places with the Fold Space technique

Lifting Strength: Unknown physically. At least Class G with telekinesis (Superior to any mortal Force user, who have displayed feats such as holding up warships weighing several to tens of millions of tonnes)

Striking Strength: At least Multi-Solar System Class, likely higher (Could physically overpower both The Son and The Daughter, and bring great pain to Jedi Grandmaster Luke with her physical attacks)

Durability: At least Multi-Solar System level, likely higher (Could not be defeated by the combined efforts of The Son and The Daughter), Body hopping, immortality, intangibility, and having to be killed physically, mentally, and astrally in her own private dimension make her difficult to kill)

Intelligence: Incredibly High; Bathed in the Pool of Knowledge, constantly plotted against the actions of Luke Skywalker and his son; took advantage of the Sith Strike Team sent to kill Skywalker and forced them into becoming her allies, later tricked the Lost Tribe of Sith into revealing their homeworld to her and taking her there, eventually outsmarted and kill the Grand Lord on the galactic capital of Coruscant and through that took over his operations and plans including gaining all of his undercover agents and Sith on the planet to be used against and force the Jedi Order off the planet, concocted a plan that eventually through one of the deceased Grand Lord's agents allowed her to become the Chief-of-State of the entire government, constantly flustered Luke and others attempts to track her down, excellent combat skills and knowledge of the galaxy and the ways of the Force

Weaknesses: She fears dying or death, she is somewhat arrogant, and has a constant yearning for attention and being loved by masses of people after her encounter and mental duel with the Grand Lord of the Lost Tribe of the Sith