VS Battles Wiki
Register
Don't have an account?
Sign In
Advertisement
in: Tier 4, Tier High 4-C, Manga Characters,
and 21 more

Abe no Seimei (Sousei no Onmyouji) 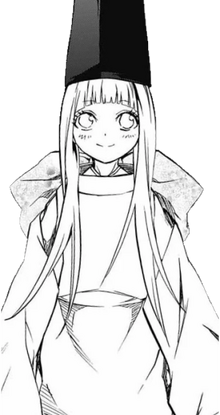 Abe no Seimei is the greatest exorcist to ever exist and is the one who sealed the Kegare King and imprisoned him in Magano, the dimension she created. After doing this she continued to engage in battle with him to push him deeper into Magano, this resulted in her getting possessed by him and having to resort to making her own body into a Katashiro, a cage to seal the Kegare King inside forever.

Superhuman Physical Characteristics, Power Bestowal, Immortality (Type 1; Has lived for over 1000 years not aging), Flight, Creation (Created Magano, a separate dimension), Energy Projection, Telekinesis (The spell Wind Blast Bullet enchants rocks allowing them to float and be controlled by the user), Statistics Amplification (Exorcists have multiple enchantments that enhance defense, speed and offence), Healing (Exorcists can heal wounds using their spiritual power through a spell), Weapon Creation (Exorcists can enchant normal weapons with their spiritual power making them far more powerful), Aura (All exorcists have an aura), Portal Creation and Dimensional Travel (can open a portal using a spell to go into Magano), Forcefield Creation, Energy Manipulation (Able to control the Yang energy flowing through his body), Life Manipulation (Can create spiritual entities with his spiritual power), Enhanced Senses (Can see and sense Spiritual Power flowing out of people), Non-Physical Interaction (Able to interact with Spiritual Power and Kegare who are born of negative thoughts and emotions), Purification (Type 2. Can purify the kegare of the negative emotions), BFR (Can create the gate to Magano which can only be opened by the talisman), Summoning (Has more than 10,000 shikigamis to summon), Sealing (Able to turn herself into a Katashiro Cage, a sealing that sealed the Kegare King for over 1,000 years)

Forcefield Creation with Genbu (Able to create barriers of spiritual power that automatically protects the user from kegare attacks), Spatial Manipulation with Seiryū (Can shoot out a beam of energy that devours space itself), Earth Manipulation with Kochin (Can control various forms of earth), Water Manipulation with Tenkō (Enchants the water in the atmosphere to control and create various types of weapons and missiles)

Corrosion Inducement/Curse Manipulation/Density Manipulation (Exorcists are able to put a force field of yang energy around their body to block out Yin energy and the effects of it), Possession (Resisted the Kegare King possessing her)

Attack Potency: Large Star level (Created Magano, a separate dimension stated to be a world on multiple occasions and also shown to house a star and implied to have a moon as well), varies with Shikigamis (Has access to over 10,000 shikigamis), Can ignore conventional durability with Seiryu | Unknown (Sealed within Magano, suppressing the Kegare King so it is unknown if she is at full power or drained)

Lifting Strength: At least Class 10 (Should be above Gabura)

Durability: Large Star level (Should scale to her own spiritual power) | Unknown (Sealed within Magano, suppressing the Kegare King so it is unknown if she is at full power or drained)

Intelligence: Genius, shouldn't be any less of an expert at exorcism and use of spells than Arima or Shimon.