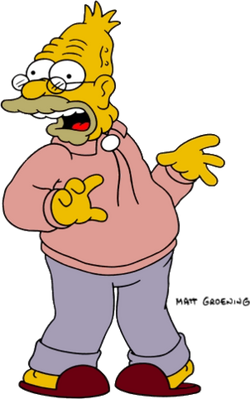 Age: Varies (His age is not consistent, one episode said he's 83, but another says he's 86 and another 87. None of these ages could realistically work since he's supposed to be a WW2 veteran. The floating timeline that the show runs on does not help)

Powers and Abilities: Superhuman Physical Characteristics, Weapon Mastery (Was a sergeant in the army), Martial Arts (Is skilled in wrestling), Extrasensory Perception (Can see ghosts), Toon Force, Age Manipulation (Almost turned Bart into an old man), Sleep Manipulation (As seen here), Resistance to high frequency Sound Waves (Was unaffected by a sound wave that was loud enough to cause someone's head to explode) and Extreme Heat (Was unaffected by a Lava Rock that hot enough to melt a large hole in the floor)

Speed: Supersonic (Comparable to Bart, Shouldn’t be much slower than Homer)

Durability: At least Building level+ (Comparable to Homer Simpson. Survived having a piece of concrete falling on his head)

Stamina: Likely low (Due to his age)

Intelligence: Average (Although, he can be a bit senile)

Weaknesses: He has many health problems due to his age

Retrieved from "https://vsbattles.fandom.com/wiki/Abe_Simpson?oldid=6960981"
Community content is available under CC-BY-SA unless otherwise noted.