VS Battles Wiki
Register
Don't have an account?
Sign In
Advertisement
in: Tier 9, Tier 9-B, Characters,
and 44 more 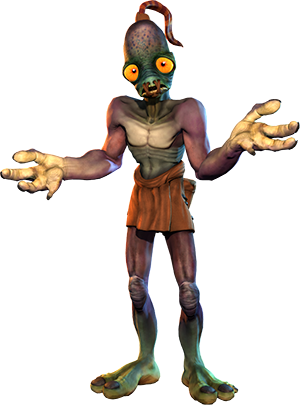 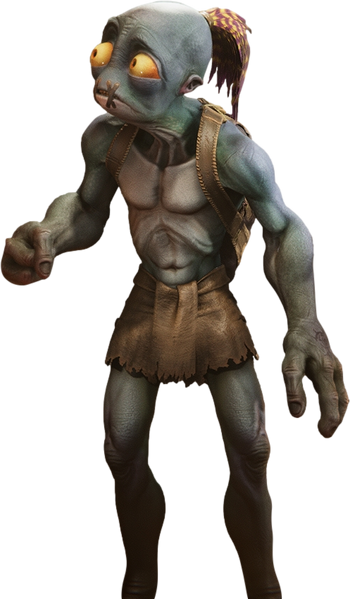 Abe (also known as Stitch Lips among fellow Mudokons) is the first primary protagonist in the Oddworld franchise. He is a Mudokon, the native race of the continent Mudos. He is recognized by his species as the Messiah of the Mudokons. Despite Abe's skepticism in being the 'chosen one', Abe managed to liberate a large portion of his species from Glukkon oppression. He is also known for liberating any form of life that is being oppressed by unethical businesses such as the Vykkers of Vykker's Labs.

Tier: 9-B, likely higher as Shrykull

Powers and Abilities: Superhuman Physical Characteristics, Weapon Mastery, Stealth Mastery, Can roll on the ground, Possession (Can possess enemies/farts via chanting and make them explode at will), Social Influencing (Via GameSpeak), Acrobatics (Can perform a double-jump in Soulstorm), Invisibility (Via Invisibility Ring and Invisible vendo), Healing (By chanting to absorb birds to recover his health. Via Healing Ring and Health Up vendo), Shockwave Manipulation (Can detonate and explode everything within range via Spirit Ring), Fragrance Manipulation (Can fart up an explosive gas cloud), Explosion Manipulation (Via grenades, explosive fart, Fizzy Pow and a spirit ring that detonates all bombs in his range), Status Effect Inducement (Can stun enemies via IED Stun Mine and Smoke Screen Plus), Portal Creation (By chanting), Resurrection (Can revive deceased Mudokons via spooce and Antidote in Soulstorm), Statistics Amplification (Can jump much higher via Bounce and get a temporary speed boost via Expresso. Can also upgrade Mudokons via spooce), Teleportation (Teleported himself away from SoulStorm Brewery's explosion in a form of birds), 4th Wall Awareness, Smoke Manipulation (Via Smoke Screen), Fire Manipulation (Via Brewnade and Flamethrower), Adhesive Manipulation (Sticky Fizzy Pows can stick into enemies and surfaces. Bouncy Binding Candy can instantly tie up enemies when hit), Transformation (Can turn into his Shrykull form), Minor Resistance to Disease Manipulation (Didn't become ill after drinking SoulStorm Brew, only farting up explosive clouds), Electricity Manipulation and possible Invulnerability (When as Shrykull)

Attack Potency: Wall level (Can easily smash wooden crates with his bare fists. Comparable to characters who can harm/damage him), likely higher as Shrykull (His lightning bolts are likely as powerful as Mudokons', who are able to chant a giant concentrated lightning storm that destroyed RuptureFarms)

Durability: Wall level (Survived an explosion which destroyed a wall and sent him flying off Necrum Mines), likely higher (Comparable to Molluck, who seemingly survived a lightning strike despite going unconscious). Higher as Shrykull

Range: Standard melee range by slapping. Several to hundreds of meters with items/abilities

Intelligence: Above Average (Completed the Scrabania and Paramonia trials. Is very good at stealth, able to sneak around high-security facilities undetected. Often outsmarts enemies into traps. Can convince fellow Mudokons to make orders like following him to freedom, pulling levers, etc. In Soulstorm, is able to craft various useful items/weapons from objects he found)

Weaknesses: Is very clumsy, has no fighting experience. GameSpeak is only usable if there are other Mudokons in the fight.