VS Battles Wiki
Register
Don't have an account?
Sign In
Advertisement
in: Characters, Female Characters, Evil Characters,
and 30 more 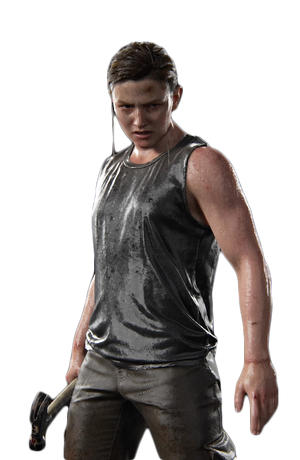 Abigail "Abby" Anderson is the playable character of The Last of Us Part II. A member of the Fireflies broken by tragedy when Joel Miller murdered her father Jerry Anderson, Abby made it her mission to avenge Jerry's demise.

Origin: The Last of Us

Attack Potency: Wall level (Beat Joel to death with a golf club. Can physically overpower the Infected and even stomp their heads into mush. Pushed Tommy through a wooden banister. Slammed Ellie with enough force to smash through a wooden floor. Drove a pickaxe deep into a woman's skull)

Speed: Athletic Human with Subsonic combat speed and reactions (On par with Ellie). Subsonic+ to Supersonic+ attack speed with firearms

Durability: Wall level (Endured attacks from Ellie. Survived falling through a hole in the floor alongside the Rat King)

Stamina: Very High (Even after being in prison for some time, she was able to endure an extended scuffle with Ellie, where she would be stabbed and nearly drowned several times)

Intelligence: Above Average (Abby is a capable soldier, being trained by the Fireflies and WLF from a young age. She is so skilled that Isaac made her one of his highest ranked soldiers, intending to place her in charge of an entire army for the invasion in Seraphite territory)

Weaknesses: Has a fear of heights

Joel (The Last of Us) Joel's Profile

Daniel LaRusso (The Karate Kid) Daniel's Profile (Pre-Time Skip Daniel was used, no weapons were allowed, and speed was equalized)