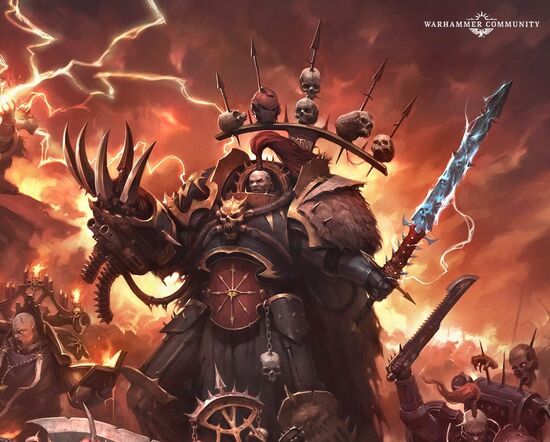 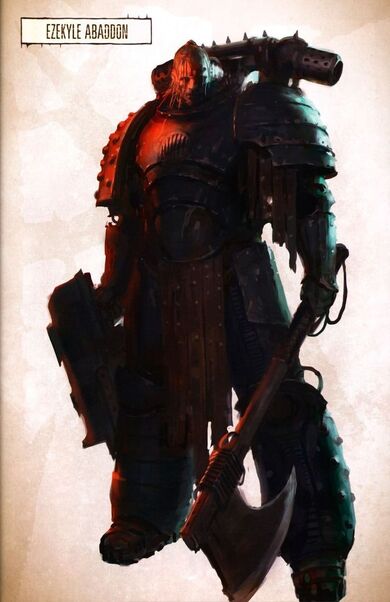 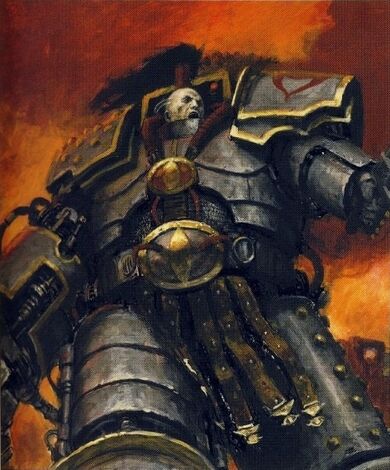 "I am the Arch-fiend, the Despoiler of Worlds, and by my hands shall the false Emperor fall."
— Abaddon the Despoiler, Warmaster of Chaos

Abaddon the Despoiler, once named Ezekyle Abaddon, is the Warmaster of Chaos, a Chaos Lord and the greatest Champion of Chaos Undivided in the galaxy. He is the commander of the Black Legion of Chaos Space Marines and is rumoured to be the clone-progeny of the Warmaster Horus, the greatest Traitor in Imperial history, and at one time his most favored son amongst the Space Marines of the Sons of Horus Legion. He is now infamous for leading Black Crusades, the terrible military campaigns during which the normally fractious Forces of Chaos unite under his leadership and launch a massive attack against the Imperium from within the Eye of Terror. The most recent of these attacks, the 13th Black Crusade in 999.M41, led to the fall of the vital Imperial Fortress World of Cadia, the birth of the Great Rift that divided the galaxy in half and the start of the Noctis Aeterna.

The name of Abaddon, the Warmaster of Chaos, has become a bitter curse within the Imperium. During the Great Crusade, Abaddon rose to become Captain of the 1st Company of what was then called the Luna Wolves Legion. When the Horus Heresy came to a head, it was clear that Abaddon's loyalty lay with his Primarch. He led the Terminators of the re-named Sons of Horus across Istvaan, Yarant, and Terra itself. Abaddon's anguish at his master's death at the hands of the Emperor drove him deeper into madness and hatred than any mortal should ever sink. Before retreating, Abaddon took up the Warmaster Horus' body and fought his way out of the quickly deteriorating battle before the Imperial Palace. With their cadaverous prize, the Sons of Horus Legion fled before the Emperor's victorious armies.

When Abaddon returned, it was at the head of a diabolic horde ravaging star systems around the Eye of Terror. His Heretic Astartes, now called the Black Legion, were at the forefront of the attack, destroying all in their path. During this 1st Black Crusade, Abaddon formed many bloody pacts with the Chaos Gods. Below the Tower of Silence, he recovered a Daemon Sword of prodigious power, making him nigh unstoppable. Since then, Abaddon has dreamed of forging an empire of Chaos upon the ruins of the Imperium. Twelve more Black Crusades have followed, each achieving some dark purpose that even the mightiest sages of the Imperium cannot discern. It is said that he alone has the power to unite the Traitor Legions and finish the treachery begun ten thousand standard years ago, ripping the Emperor from His place on the Golden Throne and at last claiming the galaxy for the Ruinous Powers.

Tier: At least 4-B, possibly higher

Powers and Abilities: Space Marine Physiology, Immortality (Type 1, 3 and 4; if he is killed, it is very likely the powers of Chaos can simply resurrect him), Resurrection (Will likely be brought back to life if he is ever killed), Forcefield Creation (Through Iron Halo technology, possible also through Chaos magic), Weapon Mastery (One of the most skilled weapon users in the entire galaxy), Martial Arts (Abaddon is among the most deadly fighters in the galaxy, having risen to the top of the ladder in terms of Chaos warriors and is utterly unchallenged in this position from beings such as the Daemon Primarchs), Blessed (Abaddon is the greatest mortal champion of Chaos Undivided, and is blessed by all four Ruinous Powers, signified by his Mark of Chaos Ascendant which contains all others Marks within it), Vehicular Mastery, Matter Manipulation (Through his Power Claw), Durability Negation (Via the Talon of Horus, which has a power field that disrupts the bonds of molecules, and Drach'nyen, which cuts through reality with little care as to the durability of an object), Soul Manipulation (Drach'nyen eats the souls of those it slays, and adds them to the gruesome collection of tortured faces on it's blade), Reality Warping (Along with his Chaotic powers, Abaddon is capable of literally cutting through reality itself through the use of his daemon sword), Aura (He can be enveloped in an aura of psychic, daemonic energy whenever he is angry), Power Absorption (Drach'nyen can drink in the power of the Immaterium, rendering even barriers made of it useless), Genius Intelligence, Damage Reduction (Through Dark Destiny), Precognition (Through the powers of the Daemon Prince Xyn'Goran), Magic (Abaddon is blessed with powers of the Warp, which are essentially magic, though is also empowered by Tzeentch, the God of Sorcery), Sound Manipulation (Should be capable of releasing a piercing sonic scream called a Warp Scream through the Mark of Slaanesh), Disease Manipulation (Should possess some degree of this through the Mark of Nurgle), Rage Power (Courtesy of the Mark of Khorne), Statistics Amplification (Of weapons, through Warp Focus), Acid Manipulation, Pain Manipulation (Through Winds of Chaos), Biological Manipulation (Via Winds of Chaos and this), Summoning (Of daemons. Learned the arts of daemonology by Lorgar Aurelian), Resistance to Magic, Telepathy, Mind Manipulation, Empathic Manipulation, Soul Manipulation, Spatial Manipulation, Time Manipulation, Matter Manipulation, Reality Warping, Existence Erasure, Aura, Conceptual Manipulation (Resistant to all the myriad of different attacks that can be made on him by the powers of the Warp, due to blessings of the Chaos Gods), Corruption (It is nearly downright impossible for corruption to take hold of Abaddon, for he is already taken as much as any mortal can be to the Chaos Gods, and even then can actively refuse their attempts to transform him into a Daemon Prince)

Attack Potency: At least Solar System level, possibly higher (Killed what was described as a perfect clone of his father with ease, shattering his weapon, albeit he was injured at the time. Forcibly made some of the Daemon Primarchs submit to his cause. Killed Sigismund, one of the strongest Astartes to ever live. As the greatest mortal champion of Chaos Undivided he could be comparable to Horus himself after his fall. Has defeated Khârn the Betrayer). Negates durability with Talon of Horus, Drach'nyen and other abilities

Speed: At least Subsonic movement speed (Should be far faster than regular Marines, could somewhat keep up with Sigismund even in bulky Terminator plate), with Massively FTL+ reactions/attack speed (Should be somewhat comparable to Sanguinius. Caught the clone of his father by surprise, impaling him)

Durability: At least Solar System level, possibly higher (Could be comparable to the Primarchs)

Stamina: Immense (Even regular Space Marines can fight for weeks on end without rest in the worst battlefields imaginable, with numerous life threatening injuries, and Abaddon, being a veteran of thousands of battles across millennia, along with being blessed with the power of the Chaos Gods, should be vastly superior)

Intelligence: Genius (An incredibly knowledgeable and cunning military leader who is the sole man alive in the entire galaxy that can unite all Traitor Legions into a single offensive. Formulated the course of the Long War and has been leading the Imperium on for 10,000 years through twelve consecutive "failed" campaigns, each resulting ultimately in him achieving his goal, although not without hiccups. While not as naturally gifted as the Primarchs he is still an immensely enhanced warrior mentally, both through scientific and likely Chaotic means, with millennia of experience. Beat a Daemon Prince of Tzeentch, which are immensely intelligent already, and who possessed knowledge over much of time, in an impossible game of his own design)

Weaknesses: None notable, save likely his own hubris

Drach'nyen can rip through armour, flesh, bone and souls without resistance. The daemonic spirit animating this fell weapon can alter the blade's appearance, revealing the skulls and faces of the souls it has devoured. 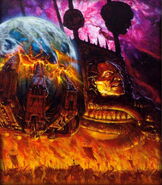