VS Battles Wiki
Register
Don't have an account?
Sign In
Advertisement
in: Tier 7, Tier 7-C, Characters,
and 29 more 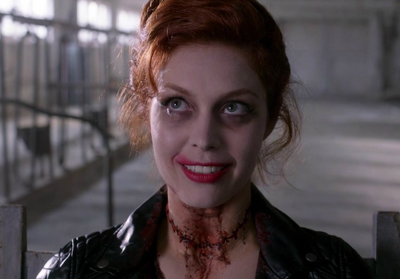 Abaddon was one of only two remaining Knights of Hell, the other being her retired master, Cain. Abaddon was single-handedly responsible for the extinction of the original Men of Letters. She arrived in the present through time travel in her hunt for Henry Winchester and the key of the Order of Letters he was entrusted with but failed to retrieve it, with Henry's grandsons Sam and Dean Winchester taking it instead. Upon discovering the shameful state Hell had fallen into in her absence, however, Abaddon abandoned her hunt for the key and began a crusade to take over Hell herself to remake the world as she saw fit—with herself as Queen of Hell, ruling over demons, angels, and humans alike. As part of her plan she had her few loyal demons pull the souls from innocent people to bring these souls to Hell to turn into demons. In an attempt to use Crowley to trap the Winchesters, Abaddon was killed by Dean with The First Blade after he proved immune to her powers due to the Mark of Cain.

Attack Potency: Town level (As a Knight of Hell, she should be superior to demons such as Ardat, who overpowered a weakened Castiel, though she is inferior to stronger angels like Gadreel)

Speed: Subsonic+ with Massive Hypersonic Reactions (Powerscaling from Astaroth and angels such as Castiel)

Durability: Town level (Although the nature of her true form makes her difficult to kill)

Intelligence: Quite High. Thousands of Years of experience. Knowledgeable in Magic and Secret Society, and a military genius.