VS Battles Wiki
Register
Don't have an account?
Sign In
Advertisement
in: Tier 6, Tier 6-C, Tier High 6-C,
and 40 more 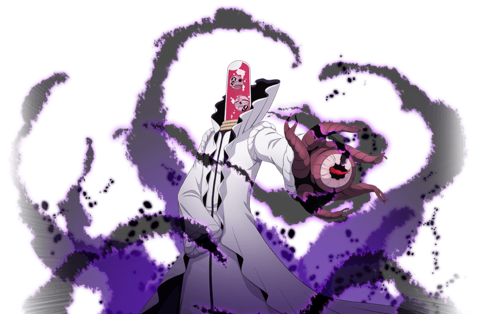 Aaroniero Arruruerie is the 9th Espada of Sosuke Aizen's army. He is the only remaining first-generation Espada and the only one of their numbers to have once been a Gillian-class Hollow, having increased his power far beyond its former bounds by consuming tens of thousands of other Hollows and gaining their abilities. As an Espada, the aspect of death he symbolizes is greed.

Powers and Abilities: Superhuman Physical Characteristics, Soul Physiology and Hollow Physiology (Soul: High-Tier/Hollow: High-Tier Arrancar), Expert Swordsman, Water Manipulation, Absorption (He can absorb souls to gain their abilities, skills, and memories), Regeneration (Low with Resurrección), Possession (Metastacia's abilities allow him to invade the bodies of others and take control of them), Limited Power Nullification (Once a night, a batch of tentacles on Aaroniero's released body can shatter a Zanpakutō, Reiryoku can null the abilities and techniques of those massively weaker than Aaroniero), Shapeshifting (He can shapeshift into any Hollow he's absorbed, in addition to Kaien Shiba), Telepathy and Limited Information Analysis (Aaroniero can telepathically send data of his opponent to other Espada instantly with Ninshiki Doki), Large Size (Type 1 with Resurrección), Resistance to Extrasensory Perception when using Sonído (Using Sonído allows the user to bypass Extrasensory Perception)

Stamina: Very high. Lesser characters can fight for days at a time, and Aaroniero can continue fighting even after taking injuries that would be lethal for humans.

Range: Extended melee range, Hundreds of meters to Kilometers with his abilities

Intelligence: Aaroniero is a cunning and underhanded fighter, having used his ability to shapeshift to manipulate and ambush Rukia by taking on the form of Kaien Shiba, her former mentor, attempting to talk her first into killing herself, and then into killing her allies. Throughout their fight, he exploited this psychological advantage relentlessly, all the while utilizing Kaien's skill in swordsmanship to overwhelm her. On top of Kaien's abilities, he has the knowledge and memories of tens of thousands of Hollows.

Weaknesses: Aaroniero is somewhat arrogant and sunlight will nullify the abilities he's developed through Glotonería, revealing his true form. If his glass capsule is broken, he will die. He can only destroy one Zanpakutō a night through Metastacia's ability.

Cognition Synchronization: Aaroniero can telepathically broadcast whatever he's currently viewing and experiencing to his allies.

Descorrer: A technique used by Arrancar to travel between Hueco Mundo and other worlds, creating a spiritual pathway called a Garganta with a gesture, walking through this portal to arrive at their destination in an instant.

Pesquisa: A perception technique used by Arrancar, which sends out a pulse that detects nearby sources of Reiatsu and gauging their power.

Glotonería: Aaroniero's Resurrección, a deformed tentacle-like appendage with a gaping maw that he keeps concealed in his left hand glove. Its release command is Devour, and when released, it transforms Aaroniero's lower body into a massive blob of flesh with many tentacles.