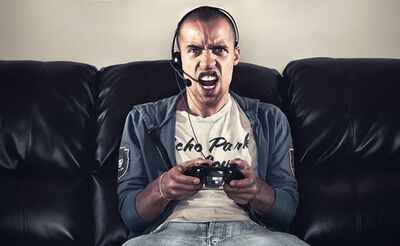 Aaron was once a diligent and caring law student. This was until, for his birthday and as a going-away present, his girlfriend Beth gave him an X-Box and a copy of Call of Duty Modern Warfare. Frustrated with his work, he started playing the game. He soon became obsessed with it, and the negativity of its players affected him deeply. He became foul-mouthed, rude, and lazy and decided to quit being a lawyer. Aaron also has a habit of using Call of Duty terminology whenever he has conversations with people.

Powers and Abilities: Weapon Mastery (Due to his addiction to video games, Aaron has an extensive knowledge of all firearms), Stealth Mastery, Social Influencing (His attitude and language makes people very angry, could be used to get into people's heads), Enhanced Senses with the MW2 night vision goggles

Stamina: Above Average (Can play video games for 18 hours straight)

Intelligence: Above Average, as he was a former law school student, Aaron is actually fairly intelligent when he focuses on something, for example, he was a finalist in the machinima Call of Duty tournament, stole a copy of Black Ops from his workplace Next Gen Games, and formulated a plan which removed his teammate Josh from his other teammates house.