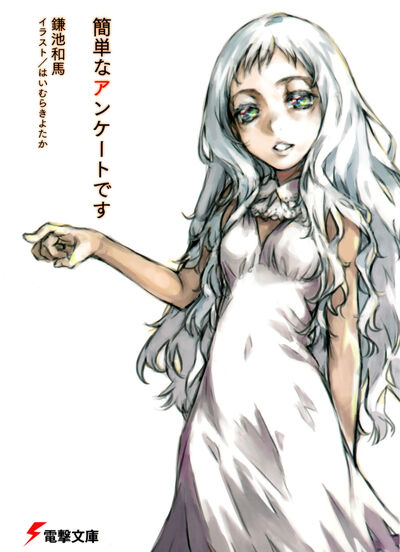 A Simple Series is the name used to refer to two Japanese light novels written by Kazuma Kamachi.

The first novel, A Simple Survey, is a collection of tiny stories related to absurdity taking the form of several shorts presented as a survey to earn extra credits in an university by a strange proffesor. After reading all the stories the reader is prompted to rank them, and this ranking will define which route Anzai Kyousuke, the protagonist and one of the students to take the survey, follows in the second part of the novel, with four short possible routes.

The second novel, A Simple Monitoring, follows Higashikawa Mamoru, another university student who takes a part-time job in an amusement park called Attraction Land. His and the other applicants' duty is to watch several videos of future attractions for the park and monitor them to find imperfections and flaws. Said videos take the form of tiny stories constituting the first part of the novel like in the previous novel. Unlike A Simple Survey though, the story in the second half is linear and follows Mamoru and the other applicants for the job as the monitoring ends and they find themselves trapped and at the mercy of a mysterious group.

Due to the structure and setting of the novels there's no impressive feats or large roster of characters, with most characters being normal humans. However, the main protagonist and main antagonist of the second novel gain a powerful hax form of Probability Manipulation. Above those two characters there's the mysterious existence known as "The White Girl", but she lacks concrete feats that can set a definite Tier for her.

Start a Discussion Discussions about A Simple Series