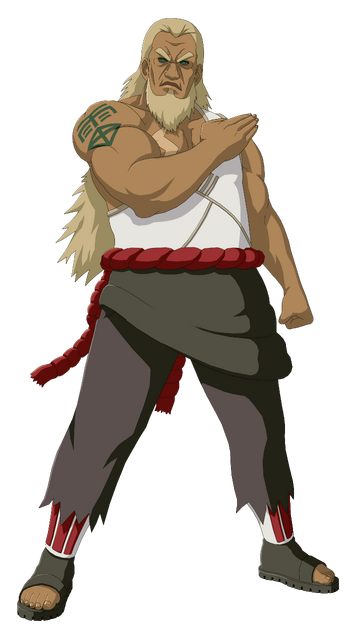 A was the Third Raikage (三代目雷影, Sandaime Raikage) of Kumogakure, renowned for being the greatest Raikage the village has ever had.

Attack Potency: Mountain level+ (Should at least be comparable to his son) | Island level (Stalemated Hachibi and cut off all the tails of the beast at once)

Speed: At least Massively Hypersonic+ (Should likely be comparable to his son) | Sub-Relativistic (Able to keep up with KCM Naruto)

Lifting Strength: At least Class G (One of the physically strongest shinobi)

Durability: Mountain level+ | Island level (Withstood RM Naruto's FRS despite his Raiton Armor being neutralized, and it took his Nukite finger to finally put him down. Took hits from Hachibi and survived)

Stamina: Extremely high (Fended off ten thousand shinobi for three consecutive days and nights before finally collapsing, and battled Gyuki, a Bijuu with vast chakra reserves, to the point that they both collapsed from exhaustion)

Intelligence: Adept and battle-hardened combatant, should possess some level of leadership qualities given his former status as a ninja village leader.

Weaknesses: His offensive capabilities surpass his defensive ones (This can be exploited to turn his attacks back on him).

Retrieved from "https://vsbattles.fandom.com/wiki/A_(Third_Raikage)?oldid=6918678"
Community content is available under CC-BY-SA unless otherwise noted.