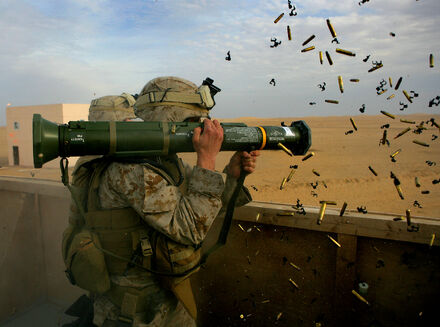 The AT4 (also AT-4) is an 84-mm unguided, portable, single-shot recoilless smoothbore weapon built in Sweden by Saab Bofors Dynamics (previously Bofors Anti-Armour Systems). Saab has had considerable sales success with the AT4, making it one of the most common light anti-tank weapons in the world.

The AT4 is intended to give infantry units a means to destroy or disable armoured vehicles and fortifications, although it is generally ineffective against current modern main battle tanks (MBT). The launcher and projectile are manufactured prepacked and issued as a single unit of ammunition, with the launcher discarded after a single use.

Tier: At least 9-B, possibly higher as some variants or with certain warheads.

Powers and Abilities: Launches grenades at high speeds and explodes upon impact, used as an anti-tank weapon.

Attack Potency: At least Wall level (Can easily destroy vehicles, concrete walls and penetrate reinforced steel. Certain warheads for the AT4 like HEDP 502 and AST warheads are specifically designed to destroy structural targets), possibly higher as other variants or with different types of warheads (Some are used in attacking bunkers and buildings while certain warheads like HEAT were capable of penetrating up to 420 mm of RHA or even 600 mm of conventional steel armor as one such as the old Soviet-designed Fagot may have been capable of taking down even the M1 Abrams tank)

Weaknesses: It can backfire if the grenades are not loaded correctly. Most variants, excluding the AT4-CS, require quite a bit of space to fire safely, so firing indoors is risky.

Retrieved from "https://vsbattles.fandom.com/wiki/AT4?oldid=5723845"
Community content is available under CC-BY-SA unless otherwise noted.