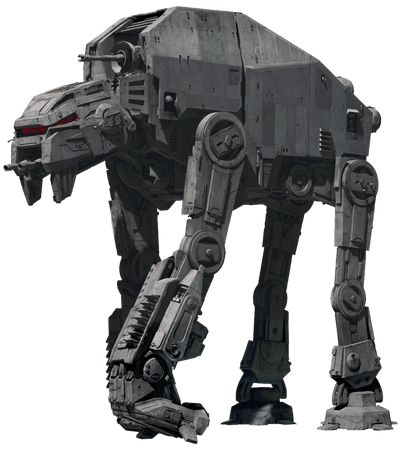 The All Terrain MegaCaliber Six (AT-M6), also known as the Gorilla Walker, was a type of heavy asssault walker utilized by the First Order Army. They were manufactured by Kuat-Entralla Drive Yards, a subsidiary of Kuat-Entralla Engineering. Like the AT-AT of the Galactic Empire and the First Order’s own AT-AT, the AT-M6 was designed to be a psychological weapon. However, it did receive various upgrades that eliminated many of the old AT-AT’s weaknesses and was also a decently powerful siege platform thanks to the battleship grade MegaCaliber Six turbolser weapon system installed along its “spine”.

Tier: 7-C with laser cannons. Likely High 7-A with turbolaser

Needed prerequisite for use: Trained crew of four to five (1 pilot, 1 gunner, 1 vehicle commander, 2 weapons engineers to operate the turbolaser)

Attack Potency: Town level+ with laser cannons (Should be more powerful than the laser cannons of the now outdated Imperial Army AT-AT and more than capable of punching through the armour of other walkers of the same kind with multiple bursts focused on the same area). Likely Large Mountain level+ with turbolaser (Designed for siege operations against fortifications designed to withstand bombardments from armaments in the range of hundreds of Megatons. Stated to be battleship grade and capable of levelling good-sized cities. Should therefore be overall at least as powerful as the turbolasers of the now outdated Arquitens-class Light Cruiser)

Speed: Superhuman travel speed (Appears to be roughly as fast as the First Order AT-AT. Likely up to 60 km/hr at most)

Durability: Large Town level (The matrixed composite armour of the AT-M6 is far more durable than the armour used on the original Imperial Army AT-AT. This vehicle should be overall vastly more durable and its armour plating should be more than capable of taking multiple bursts of laser cannon fire powerful enough to destroy something like a Kom'rk-class Fighter)

Range: Likely up to a few kilometres with laser cannons, far greater (potentially dozens of kilometres) with turbolaser.

Retrieved from "https://vsbattles.fandom.com/wiki/AT-M6?oldid=6371671"
Community content is available under CC-BY-SA unless otherwise noted.