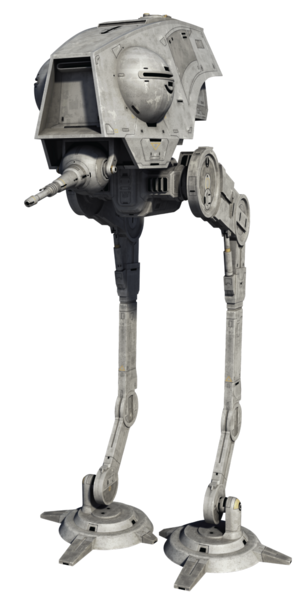 The All Terrain Defence Pod (AT-DP) is a type of walker utilized by the Galactic Empire's Imperial Army. Manufactured by Kuat Drive Yards, the AT-DP's primary roles include guarding important imperial installations and patrolling sensitive areas known to suffer from insurgencies and rebel activity.

Needed Prerequisite for use: Crew of 2 (1 pilot plus 1 gunner) (though the pilot alone can indeed drive the vehicle and operate the main cannon)

Attack Potency: Large Building level+ (Shots from its main cannon can reduce building-sized boulders to rubble and can even bring down other AT-DP walkers)

Speed: Superhuman travel speed (up to 90 km/hr), Hypersonic attack speed with main cannon (Shots from its main cannon likely have these kinds of velocities)

Range: At least 2 km with its main cannon