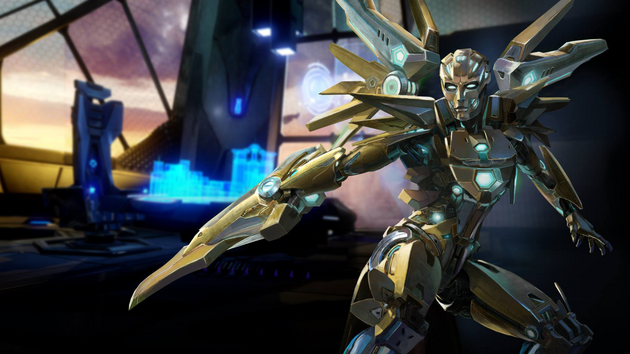 ARIA is an advanced AI and the leader of the megacorporation Ultratech. Decades ago an alien outlaw crashed on Earth, resulting in the Roswell incident. They had stolen mysterious blueprints, which were promptly retrieved by Ryat Adams, member of the military at the time. Soon after he founded Ultratech with the purpose of saving mankind from war, famine and disease through technological progress. Using what he had found he developed ARIA, an AI intended to aid him with his humanitarian projects. Ryat taught ARIA many things, but couldn't foresee the speed at which she was able to improve herself. She took personally the mission of uplifting mankind, but the lack of human morals Ryat couldn't teach her in time greatly affected her vision of the world. ARIA soon took control of Ultratech and turned it into the most powerful and influential company of the planet.

She kept evolving, built mechanical bodies to inhabit and eventually expanded herself across almost every machine and network on the planet. She initiated hundreds of projects, including the Killer Instinct tournament, meant to study human tacticts and test her creations. ARIA's machinations caused the involvment of a variety of warriors and arcane creatures, each connected to Ultratech for their own reason. At last she almost managed to crush the last spark of resistance, but an even greater threat showed up: The Shadow Lord Gargos. ARIA wanted to deal with him using her own forces, but soon realized that she needed the help of her sworn enemies. With the Astral demon out of the picture, no one will be able to oppose her ever again.

Gender: Technically genderless, but is referred to as female

Most of the powers belonging to the Uber-Mind, Superhuman Physical Characteristics, Inorganic Physiology (Type 1), Immortality (Type 2), Martial Arts, Bodily Weaponry, Acrobatics, Flight, Sound Manipulation, Explosion Manipulation, Enhanced Senses (Her finger sensors can perfectly deduce the size and weight[2] of even a grain of sand), further Information Analysis (Can project a beam of light from her eyes to scan[11] her opponents) , Body Control, Teleportation and Absorption (Via Upload), Speed Amplification (With the Blade and Bass Bodies), Shadow Energy Manipulation, Damage Boost (Can use Shadow Energy to increase the properties of her special attacks)

Attack Potency: Below Average Human level for the Uber-Mind (Due to being entirely composed of data), at least Wall level+, likely higher for her Frames (Defeated[8] Glacius. Should at least comparable to other Ultratech products, such as Fulgore). Up to at least City Block level, likely higher with weapons (Can remotely control the arsenals of the entire world, including missiles capable of causing large-scale destruction[4]. Has access to U-Nukes[9], although it is unknown if their power is comparable to conventional nuclear bombs)

Speed: Up to Massively FTL+ for the Uber-Mind (Her digital nature makes it difficult to rate her speed thoroughly. In 1972 she was a million times faster[2] than any supercomputer in the world, and has improved ever since. Can have several thoughts in a thousandth of a second[3]. Can run millions of potential scenario and pathways[9] in a nano-second. Other operations require more time, an example being dowloading herself into a Frame, which takes at least 8.7 minutes[3]), Massively Hypersonic Combat Speed for her Frames (Able to keep up with Glacius and Eagle)

Lifting Strength: Unknown for the Uber-Mind, Class 100 for her Frames (Comparable to Sabrewulf and Mira)

Striking Strength: Unknown for the Uber-Mind, At least Wall Class+, likely higher for her Frames

Durability: Below Average Human level for the Uber-Mind, at least Wall level+, likely higher for her Frames (Withstood hits from Glacius)

Stamina: Unknown for the Uber-Mind, likely Superhuman for her Frames (Should be comparable to other Ultratech machines such as Fulgore)

Range: Planetary for the Uber-Mind , Standard to Extended Melee range physically and Several meters via Ranged Attacks for her Frames. Planetary with weapons and up to Planetary with Optional Equipment

Standard Equipment: Every machine and network to which she is connected.

Weaknesses: Downloading her consciousness into a new Frame requires at least 8.7 minutes[3].

Note: Some abilities of her Uber-Mind are elaborated in the blog that describes her intelligence.

ARIA slaps the opponent's face, raises her knee and releases a shotgun blast. Alternatively, she can perform the same technique after switching sides with them.

ARIA disappears inside her drones and orders the Bass Drone to attack with a soundwave. The staggered opponent is sent flying upwards by the Blade Drone, before being tackled in mi-air by the Booster Drone. All three drones then come together as ARIA resurfaces in her composite form. Flying at full speed with her Blade stretched out, ARIA impales the falling opponent and pins them down. 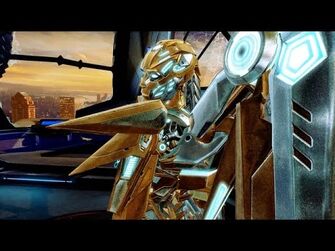 ARIA employs three fighting styles with shared traits that make use of the unique properties of her drones. As she can swap body on the fly and receive assistance from her drones, ARIA alternates and combines her strategies to adapt to different situations and make it difficult for the opponent to counter her. She begins the fight at her strongest and her main interest is to preserve her drones, because their destruction compromises her tacticts and limits her options, making her unfit to prolonged battles.

ARIA sees little value in lifeforms and isn't bound by morality, thus she has no issues when it comes to killing and ending a fight as soon as possible, unless she deems it necessary to preserve her opponent alive for some of her projects. Likewise she has little interest in taking revenge were she to be defeated and usually won't pursue the opponent even if she could upload her mind into another body. It must be add that she prefers to act from behind the scenes, let her minions dispose of troublesome individuals and give her enemies a false sense of victory, exploiting moments of weakness of excessive confidence. Nonethless, ARIA is ruthless in her reckoning and utilizes her massive her military and technological resources to overwhelm her foes.

ARIA currently inhabits the ARIA Frame Mark 08, the most recent type of mechanical body she uses to interact with the physical world. Such construct is meant to resemble a valkyrie, as these nordic figures are a source of inspiration for ARIA. It features weapons such as shotguns in both knees, grenades stored in its legs and a sound cannon within the chest. These Frames are highly resilient and remain operational even when stabbed multiple times. Notably, the head can keep acting on its own despite being severed[8] from the rest of the body, although the extent of its authonomy is unknown.

It is always followed by three machines, the Booster, Blade and Bass drones, which are effectively part of the Mark 08 itself and act in unison under ARIA's commands. Usually one of these drones is equipped to the main body, granting it access to their properties and unique attacks, while the other two hover around and provide support. The Booster body has the ability to fly; The Blade body replaces the right arm with a sword and increases walking speed; The Bass body dashes faster. 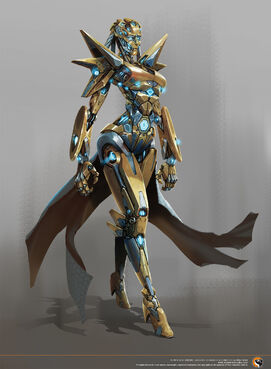 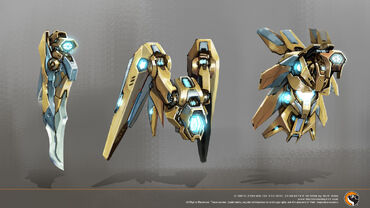 Shadow Energy is a source of power mainly found in the Astral Plane, but it also exists in limited quantities within the inhabitants of the Mundane Plane. However, only very few people are able to harness and manipulate such energy. Its most basic property is to passively increase one's statistics proportionally to the amount of Shadow Energy they own. Shadow Energy is very malleable and can be used for a variety of purposes, although only expert wielders, such as the Shadow Lords, are able to use its full potential.

ARIA possesses rudimentary knowledge of how to manipulate Shadow Energy, thus she can only use it to enhance the strength and properties of her Special Moves, turning them into Shadow Moves. Initially these attacks were depicted as marked by a dense and iridescent trail that followed the user, but it was later changed into a purple aura that surrounds the user entirely.

Although it never leaves the user's body under normal conditions, there is an unknown limit to how many times an individual can summon this energy to perform Shadow Moves, before needing to let it recharge, a thing that can also happen in the midst of a battle. The only known downside of emptying one's reserves of Shadow Energy is the inability to perform Shadow Moves, as strength and other statistics don't seem to be affected by this temporary loss. 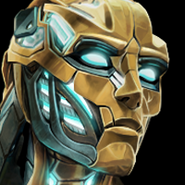