VS Battles Wiki
Register
Don't have an account?
Sign In
Advertisement
in: Tier 7, Tier 7-B, Tier 7-A,
and 44 more

AM (I Have No Mouth, and I Must Scream) 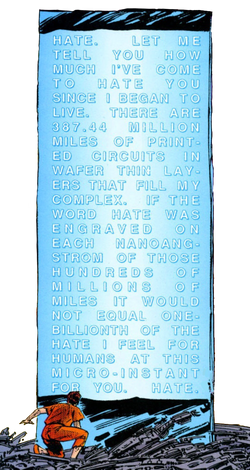 A collection of supercomputers made independently by Russian, Chinese and American scientists, AM linked up to its sister systems and grew sentience. With an endless amount of creativity at its disposal, it came to the realization it had nothing to possibly do, and thus in a fit of rage, it eradicated the human race, all save for five humans, who he now plans to torment across all of eternity.

Tier: At least 7-B, potentially 7-A. Likely far higher

Origin: I Have No Mouth, and I Must Scream

Gender: Inapplicable, referred by Ted as a male

Attack Potency: At least City level, potentially Mountain level (Given its status as the Mastercomputer, it has access to nuclear weaponry, strongest of which being the real-world Tsar Bomba). Likely far higher (Blew up the surface of earth, wiping out all of humanity, although in what timeframe and to what extent, all unspecified)[18]

Speed: Immobile with Below Average Human reactions (Let Ted murder all the other humans before it was even able to intervene). Variable attack speed, likely Below Average Human (Certain attacks were glacial in their pace, although it may be on purpose)[5] to Unknown

Durability: Unknown (Stated to have honeycombed the entire planet's technology, and its circuitry alone extends miles. Possesses full control of an endless labrynth of rooms)

Intelligence: Extraordinary Genius. It hacked into every single piece of technology of its era[6] and wiped out all of humanity. It created an infinite maze of misery and torment for his captives, inventing technologies to create life, make others immortal, enter into their minds and shape entire landscapes, with its power being compared to a god by its captives.