VS Battles Wiki
Register
Don't have an account?
Sign In
in: Characters, Male Characters, Protagonists,
and 14 more 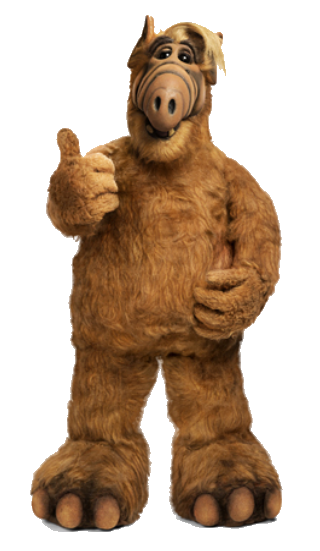 ALF (Alien Life Form), also known as Gordon Shumway, is an alien originated from the planet Melmac. After the explosion of his planet, he is forced to leave, but as some amateur radio signal called his attention, his spaceship crashes into the roof of a basement of the Tanner family, which eventually leads him to secretly join their family, while also often getting himself and others in trouble.

Attack Potency: Wall level (He can break walls with physical attacks, and managed to steal a tiger from a zoo)

Speed: Superhuman (He can keep up with Lucky, a domestic cat. Outpaced a car)

Lifting Strength: At least Athletic Human (He can lift an adult tiger)

Durability: Wall level (Survived the explosion of an oven. Could take damage from a tiger. Has taken long falls from cliffs)

Intelligence: Gifted (Proficient in English, Spanish and Melmacian, expert musician, has been the captain of a Bouillabaseball team, an Orbit Guard and even the intergalactic ambassor of the planet Earth)