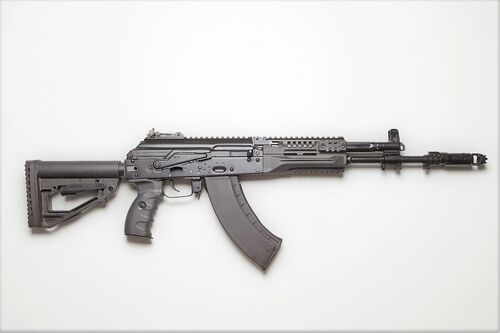 The AK-12 is a Russian assault rifles chambered in 5.45×39mm respectively. It is designed and manufactured by Kalashnikov Concern (formerly Izhmash). It is one of the modern derivatives of the Russian AK-Pattern series of assault rifles.

The AK-12 project began in 2011 by the IZHMASH factory which became part of the Kalashnikov Concern as a private venture, in an attempt to participate in the "Ratnik" trials which were held by the Russian Army. It was further developed by Kalashnikov Concern, and throughout its development and evaluation stage it has received multiple modifications to meet the Russian military's standard and to address the Russian Army's concerns regarding the cost and issues in fully automatic fire of the earlier prototype models. It went through several revisions in order to improve upon the "range of defects" that were discovered on the earlier prototype models derived from the AK-200. These were later abandoned in favor for the proven and improved AK-400, which was finalized as the AK-12 and AK-15.

Attack Potency: Street level (Firepower is within this range)

Weaknesses: Its rounds are ineffective against most types of conventional armor due to its considerably-low stopping power, hence, it will be replaced by the much more-powerful 7.62x51 NATO/.308 Winchester-based AK-308 rifle.

Retrieved from "https://vsbattles.fandom.com/wiki/AK-12?oldid=4604772"
Community content is available under CC-BY-SA unless otherwise noted.