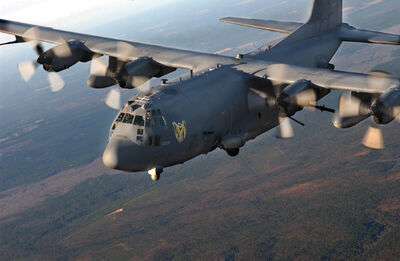 The AC-130 is a gunship modification of the C-130 Hercules and is a heavily armed, long endurance ground attack aircraft which carries a variety of various ground attack weapons ranging from machine guns to howitzers. Due to its large profile, low operating altitude, and slow speed making it an easy target, it usually flies close air support missions at night. During an attack, the gunship performs a pylon run, flying a circle around the target.

Needed Prerequisite for Use: Training and 13 crew members

In Use By: U.S Air Force

Attack Potency: Varies. Wall level with autocannons (With weapons such as the M61 Vulcan, GAU-12 Equalizer, GAU-23/A and 40mm Bofors), higher in bursts. AC-130J Ghostrider is Wall level to Small Building level with its explosive smart munitions and M102 howitzer (Standard HE shell has a 2.1 kg filler of TNT or Composition B).

Range: Hundreds of meters to kilometers with missiles

Durability: Small Building level (Is around this size)

Retrieved from "https://vsbattles.fandom.com/wiki/AC-130?oldid=5445735"
Community content is available under CC-BY-SA unless otherwise noted.