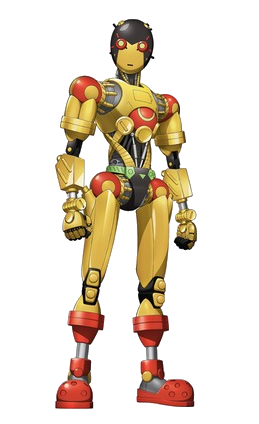 A106 (pronounced "A-Ten-Six"), referred to informally as Six, is the sixth member of the "A10" series created by graduate students Hiroshi Ochanomizu and Umataro Tenma. An experimental robot equipped with the "Bewußtsein" AI thought processing system, he is able to think and make his own conscious decisions. Due to Tenma's obsessions with grandeur, Six is also equipped with powerful 1,000 Horsepower pistons that grant him incredible physical power. Unbeknownst to any of them, Six would become a vital prototype for the robot that would soon come to be known as Astro Boy.

Attack Potency: Wall level (Is equipped with 1,000 Horsepower pistons, outputting an equivalent of 745,700 Joules per second. Can casually drill large holes in the ground and smash through metal work tables and walls with minimal power)

Stamina: Limitless (As a robot, he does not fatigue)

Range: Standard melee range normally, extended melee range with air blasts (Punched the air hard enough to push back and tear off the clothing of a similarly powerful robot from several meters away)

Intelligence: As an experimental robot, Six's mental capacities are fairly rigid and logical, following his creators' orders without question. However, his Bewußtsein system grants him increasing amounts of autonomy, defending Ran without a second thought from an unknown robot and later learning how to consistently brew delicious cups of tea (but udon is somewhat beyond him). His directives to empathize with and protect others have also led him to perform more complex actions without instruction, throwing his creators into another truck to protect them while manually disengaging the autopilot in a runaway autonomous vehicle to intentionally cause it to flip over and slow down before leaping out to stand in the vehicle's way and stop it from crashing into a parked school bus. He is also a fairly skilled hand-to-hand combatant, clashing with a battle-type robot despite having little experience doing so with successful blocks and punches

Weaknesses: Six is generally bound by Asimov's Three Laws of Robotics under normal circumstances and will thus fail to take the initiative in combat unless he is ordered to or if he is defending a human from harm

Retrieved from "https://vsbattles.fandom.com/wiki/A106?oldid=6947711"
Community content is available under CC-BY-SA unless otherwise noted.