VS Battles Wiki
Register
Don't have an account?
Sign In
Advertisement
in: Tier 9, Tier 9-C, Antagonists,
and 18 more 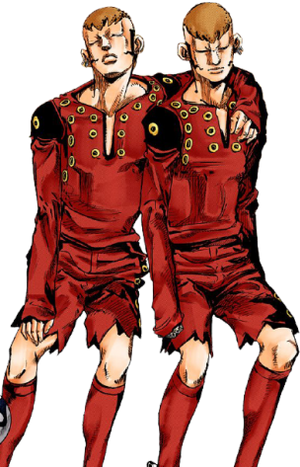 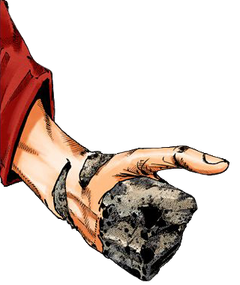 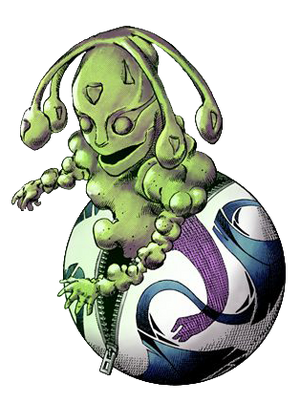 The A.Aphex Brothers are minor antagonists in JoJolion from the Love Love Deluxe arc. They intended to kill Karera Sakunami, but wound up having to fight Josuke Higashikata instead. Josuke bests them in combat and kills them both with Karera.

They were both part of the Damokan Group who sold Locacaca fruits to rich people for large sums of money.

Age: Unknown, at least adults if not much older

Superhuman Physical Characteristics, Transformation (Similar to other rock humans they are able to turn themselves into a rock), Resistance to heat and cold (While in this form they can sustain temperatures as high as 950 °C and as low as -240 °C), Immortality (Type 2, Scaling to Tamaki Damo. One of them survived being stabbed in the head by a tree branch), Extrasensory Perception (Capable of seeing ghosts and souls among some other supernatural forces that are normally otherwise invisible), Aura, and Summoning (Of their Stands)

Deconstruction, Matter Manipulation, Transmutation, Limited Body Control (Can break down things he touches with his left hand into a rocky substance and rebuild them with his right hand. Can change the shape of the things he rebuilds freely and can even do it with liquids and gases)

Extrasensory Perception (Much like its user), Incorporeality (Stands are the incorporeal manifestations of one's vital energy, and can only be harmed by other Stands), Poison Manipulation, Corrosion Inducement, Pain Manipulation (Releases a poisonous gas that can instantly eat through flesh and make Josuke convulse from pain with only a small dose. A higher dose can instantly break a body into pieces)

Attack Potency: Street level (The older brother stabbed through the jaw of a police officer with a shackle and managed to hold Josuke with steel wires. The younger brother should be comparable), Schott Key No.1 and No.2 both ignore durability

Speed: Athletic Human with Relativistic+ reactions (Kept up with and surprised Josuke)

Lifting Strength: Peak Human (Held Josuke in a chockhold that he couldn't break out of)

Durability: Street level (Both survived a massive beating from Josuke and only wound up dazed and bloodied), Building level in rock form (Comparable to Yotsuyu Yagiyama)

Stamina: Very High (Managed to stay upright after taking a massive beating from Josuke), Superhuman while in rock form

Standard Equipment: None for the older brother, Schott Key No.2 for the younger brother

Intelligence: Above Average (As with most Stand users, they are capable of using their Stand very effectively, both alone and in combination with each other. They had effectively trapped Josuke into certain death, and he only escaped due to their lack of knowledge on his abilities)

Weaknesses: Schott Key No.1 lacks in range and Schott Key No.2 has difficulties poisoning enemies due to being inside a football. The brothers aren't immune to Schoot Key No.2's poison gas. Their stone body will crumble on water without oxygen.

The first appearance of the brothers