VS Battles Wiki
Register
Don't have an account?
Sign In
Advertisement
in: Tier 7, Tier Low 7-B, Tier 5,
and 54 more 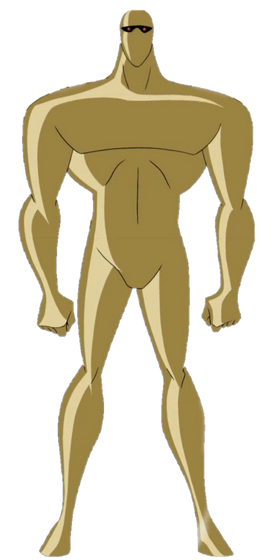 A.M.A.Z.O. is the nanotechnological creation of the late Professor Ivo. His unique structure allows him to imitate almost any ability or skill with a glance, making him a powerful foe to the Justice League until he was convinced to leave Earth and search for a purpose in life. He returned more powerful than ever after learning more about the cosmos and easily defeated the entire Justice League and the Green Lantern Corps, but later revealed that he only wished to speak with Lex Luthor for guidance. However, after realizing that his powers were being sapped by the newly revived Solomon Grundy, A.M.A.Z.O. transported himself several light-years away until he could come up with a solution, never to be seen again, until the events of Justice League Infinity.

Classification: Android (formerly), Cosmically Evolved Entity (stated to have transcended his former nanotech self and is something completely different now)

Superhuman Physical Characteristics, Inorganic Physiology (Type 2), Nanotechnology, Immortality (Type 1), Flight, Energy Projection and Energy Manipulation (Via Green Lantern ring), Heat Manipulation (Via Heat Vision), Shapeshifting, Telepathy (Read Lex Luthor's mind), Reactive Evolution, Power Mimicry and Information Analysis (Can examine and copy a being's physiology, weapons and mannerisms with a glance of part of their body), Adaptation, Power Nullification (Can disrupt magic through Nth Metal), Electricity Manipulation (The Nth metal mace constantly conducts electricity), Psuedo-Telekinesis, Supernatural Willpower (Can utilize a Green Lantern ring), Danmaku (Shot a flurry of energy from a copied Green Lantern ring), Enhanced Senses (Can enhance its vision, heard Lex from half a city away), Regeneration (Mid, instantly regenerated its head), Resistance to Electricity (Unaffected by Hawkgirl's mace and an electric fence). Should have all the powers of Superman, Green Lantern, Martian Manhunter, Wonder Woman, Hawkgirl and the Flash (Luthor stated that it has all of their powers)

Same as before to a far greater extent, Existence Erasure (Erased missiles with a thought), Regeneration (Low-Godly, regenerated from the threads of its consciousness), Quantum Manipulation and Higher-Dimensional Manipulation (A.M.A.Z.O. was directly affecting the Mirrored Room, stated to be a sort of "quantum vortex" beyond space and time), Resistance to Existence Erasure and Void Manipulation (Resisted the anti-life equation after adapting, and regenerated into the void of non-existence)

Attack Potency: Small City level (Was at this point at least as strong as the likes of Superman after copying his and the other Justice League founders' powers. Claimed that the league had nothing more to offer him) | Planet level (Casually warped Oa out of his path and is implied to be able to destroy Earth with ease. Effortlessly overpowered the entire Green Lantern Corps, whose combined power is stated to be capable of destroying half a planet the size of Earth. Stated by Luthor to be the most powerful creature in the universe) | Low Complex Multiverse level (Destroyed the body of Amazo-II in one blow which was at ground zero of his own attack[1] which destroyed the entire multiverse[2] as well as the Mirrored Room, which transcends space and time[2])

Durability: Small City level (Can take blows from Superman. Overall at least as durable as Superman if not more so at this point) | Planet level (Was completely unconcerned with the Green Lanterns threatening to destroy half of Earth in an attempt to destroy him) | Low Complex Multiverse level (Took no damage from A.M.A.Z.O. II's attack after regenerating)

Stamina: Limitless (As a nanotech android, his stamina/endurance is limitless)

Range: Extended melee range with fabricated Nth metal mace, dozens of meters with fabricated lasso, heat vision, copied Green Lantern ring | Interdimensional and Interstellar (Warped planet Oa back to the center of the universe all the way from Earth, from another dimension) | Low Complex Multiversal (Travelled to a dimension that transcends space and time)

Intelligence: A.M.A.Z.O.'s cognitive systems allow him to learn things 10,000x faster than humans, allowing him to completely mimic the fighting styles of each member of the Justice League within moments of meeting them. Also, his unique structure allows him to obtain any skill he wishes simply by scanning his opponents at an atomic level, granting him complete proficiency over a Green Lantern Ring despite being one of the most sophisticated pieces of technology of the universe in seconds. However, he is still limited by human-like cognitive functions along with his state as an artificially created entity, making it difficult for him to understand abstract concepts like philosophy.

Weaknesses: Magic, particularly Chaos Magic, is beyond his comprehension and he will often be forced to retreat until he can fully analyze it. A.M.A.Z.O. may potentially withdraw from any opponent in similar situations. He cannot replicate magic as it falls outside of the realm of science and his analytical capabilities. He also gains the weaknesses of those he's copying (albeit he can nullify and evolve beyond them if given enough time).