VS Battles Wiki
Register
Don't have an account?
Sign In
Advertisement
in: Robots, Genderless Characters, TV Characters,
and 21 more 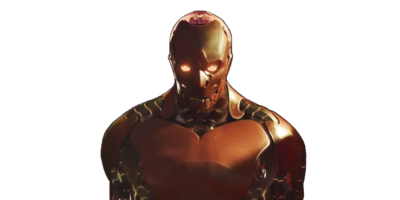 A.M.A.Z.O. or "Anti Meta-human Adaptive Zootomic Organism" is an artificial intelligence robot created by Ivo Laboratories with the ability to copy an individual's physiological abilities. It appears in The CW's Arrowverse crossover event, Elseworld. A.M.A.Z.O. was built to scan a meta-human's powers and abilities & convert them into data. But while using a nano-adaptive hybrid of the "Mirakuru" serum as part of it, it was also built with the capability of utilizing any abilities it has already scanned.

Attack Potency: Small City level (Was able to evenly match Superman and Supergirl, it later took the both of them to physically restrain it)

Speed: Relativistic (Was able to perfectly keep up with Flash)

Durability: Small City level (Was unaffected by blows & Heat Vision from both Superman and Supergirl without ever receiving any damage, Took a lightning bolt from The Flash)

Stamina: Possibly infinite (Does not tire due to being a robot)

Intelligence: Above average (A.M.A.Z.O. is an A.I. robot built with the ability to adapt to any situation, It knew how to perfectly utilize ever power it had gained & was even smart enough to know to retreat when it served a better strategy than fighting)

Weaknesses: Kryptonite (Having copied both Superman & Supergirl's physiology it gain their weakness to the substance)