VS Battles Wiki
Register
Don't have an account?
Sign In
Advertisement
in: Variable Tier, Tier 10, Tier 10-C,
and 28 more 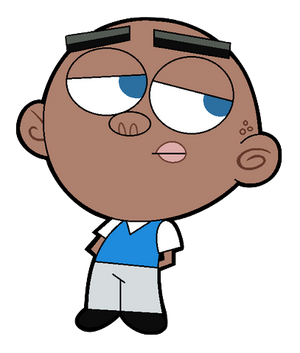 A.J. is a notable character in The Fairly OddParents!, he is a kid genius who repeatedly invents impressive technology to help the world and for his own personal uses. He is one of Timmy's 2 best friends along with Chester.

Classification: Kid genius, the smartest kid in the world (As suggested in Fool's Day Out)

Powers and Abilities: Superhuman Durability at his peak, Genius Intelligence, Toon Force, Body Control & Elasticity (Had half of his head flatten out of panic[1]. Had a hit he took sunken in a part of his head[2]. Had his body smashed and manually turned into an American football ball by Francis[3]), Immortality (Type 2. Up to 3), Regeneration (None usually, up to Low-High), Explosion Manipulation (Exploded out of sheer pain, leaving a brief cloud of smoke, nothing visible of his body and his clothes scattered. 50 seconds later he was celebrating fine how other character exploded while himself almost naked[4]), Preparation, Acrobatics (Shown in episodes such as The Secret Origin of Denzel Crocker!, Which Witch Is Which?, The Big Scoop! and Operation F.U.N.). His inventions and technology give him access to; Cloning (Initially showing to have an inactive clone of himself[5], later displaying at least 13 clones of himself[6] and making active use of some of them[7]), Information Analysis (His "generic tracking device" informs the location of anyone if given a sample of their DNA, also giving an image of the target, their weight, height and other data about them. This even works on fairies, despite people not knowing they exist[8]), likely Teleportation (Teleported Timmy from outside of his house into a room in it[9], although his parents could have invented that as they are geniuses too), Limited Temperature Manipulation & Energy Projection (Can melt things with his heat beam), Biological Manipulation & Fusionism (Via Gene Splicer, which can be used to fuse beings together by merging one inside another, as well as its clothes)

Attack Potency: Varies (Due to his Toon Force) from Below Average Human level (That of an average kid. Was expelled from sport clubs[10]. Exchanged blows with Chester[11]) to Athlete level (Lifted and used a battering ram to knock over a door in 1 hit, with said ram having previously sounded to be metallic[12]. Was among kids who threw balls hard enough to bend a wall and a door, seemingly having done the same[13]. Casually lifted Chester above his head and threw him on the ground with one hand[14]), Wall level with technology (Made a robot that could beat up Francis[15]), able to ignore durability via Gene Splicer

Speed: Varies from Below Average Human (That of an average kid) to Superhuman (Reacted to, and reflected, light coming into him; Timmy, Chester and A.J. know this as "evasive maneuver 12"[16]. Moved several meters in around a second[17]. Ran fast enough to set fire on the ground where he moved[18])

Lifting Strength: Below Average Human (At his best he casually lifted Chester above his head and threw him on the ground with one hand[19], but he's regularly not that strong)

Striking Strength: Varies from Below Human Class to Athlete Class

Durability: Varies from Below Average Human level to higher (Casually resisted being kicked into the air by Chester in a celebration they were doing[20]. Took blows from Francis[21])

Stamina: Varies from low to very high (Stayed in a cinema while other people laughed for 2 weeks without stopping, apparently without doing much himself, and he remained fine after this[22])

Standard Equipment: "Invisible criss-crossing laser highlighter spray", a small laser, and a grappling hook (Shown while in school without notable prior preparation[23]). An energy sword no different to a lightsaber in appearance (Also shown without having prior preparation[24])

Intelligence: Extraordinary Genius. Although not the smartest, A.J. is the most consistent genius in the show. He's repeatedly shown with academic excellence and spends a lot of time in his laboratory with his technology, occasionally showing new inventions or already invented devices he built on his own. He created several clones of himself[25], a Gene Splicer to fuse beings together[26], a robot to act as his brother that could understand emotions[27], made a device that would help end world hunger, tracked the computer virus that was Timmy immersing into the internet[28], created a tracking devide that could somehow inform very specific things of a target[29] and a heat beam to melt things. Won a Nobel Prize[30]. While mostly inapplicable to his current self, 20 years into an alternative future ruled by Vicky and with the world vastly destroyed, in a timeline that started the same as the regular one, A.J. was able to create a belt that could allow the user to time travel, as well as a gadget in his hand that shoots energy that he used to blow up his old school

Weaknesses: Can be jealous and arrogant at times

A.J. in the bad future shown in Channel Chasers

SCP-008 (SCP Foundation) SCP-008's profile (Both were 10-A with anything above restricted and had prior knowledge of each other. Speed was equalized)

Chimpanzee (The Real World) Chimpanzee's Profile (Speed was equalized. Both had prior knowledge of each other and anything above 10-A was restricted)

Phineas Flynn (Phineas and Ferb) Phineas' Profile (Speed was equalized. Both had prior knowledge of each other and anything above 10-A was restricted)

Sherlock Holmes (Movies) Sherlock Holmes' Profile (Speed was equalized. Both had prior knowledge of each other and anything above 10-A was restricted)