VS Battles Wiki
Register
Don't have an account?
Sign In
Advertisement
in: Absorption Users, Acausal Characters, Antagonists,
and 38 more 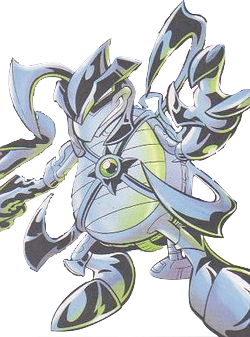 A.D.A.M. is the "son" of Dr. Ivo "Eggman" Robotnik in the Sonic the Hedgehog comic series and its spin-offs published by Archie Comics.

He is an accidental creation of artificial intelligence. His name stands for both "Autonomous Digital Assault Microbe" and "A.D.A.M. Determines Anonymous Movements", as he was a sentient computer virus. While originally he strictly followed Dr. Eggman's orders, he started to grow his own personality after interacting with Tails. A.D.A.M. would developed his own objectives and motives under the alias "Anonymous" and enact the prophecy the Ancient Walkers foretold long ago, The Great Harmony.

Gender: None, but referred to as Male

Age: Unknown, at most 1 year-old

Same as before on a vastly enhanced scale and all of the abilities from Power Rings, as they're the by-products of the Chaos Emeralds. Super A.D.A.M. obtains a greater link to the Chaos Force that allows him to freely use nearly all Low, Mid, and High-Level Applications of Chaos Energy and grants the following: Reality Warping and Subjective Reality (Wielders of large amounts of Chaos Energy can reshape reality in accordance to their desires and their thoughts), Conceptual Manipulation (Type 1. All Chaos Energy, be it basic blasts or advanced techniques, can affect, manipulate, and destroy the concepts that shape reality) and Energy Manipulation (Through Harnessing Chaos Energy), Regeneration (Low-Godly. With enough Chaos Energy, beings can regenerate by using their life essence), Empowerment (Chaos Energy is strengthened by the emotions and wills its users), Higher-Dimensional Manipulation (Those who wield Chaos Energy can affect and destroy higher-dimensional beings and spaces, such as Master Mogul dealing a mortal blow to the Ancient Walkers), Age Manipulation (Amy Rose physically aged herself by several years with the Ring of Acorns) BFR (Power Rings have the capability of sending the desired target to any place that the wielder chooses, be it different universes or Mega Man's own, separate multiverse), Healing and Resurrection (Under a time of great distress, Sonic managed to revive his father through the use of a Power Ring), Purification (Types 2 and 3) (Power Rings have been shown to be capable of removing the negative energies of corruptive mind control, as well as aid Sonic in restoring his speed when it was impaired), Duplication (Chaos Energy can be used to duplicate oneself or others, as displayed when Sonic unintentionally created a separate version of Super Sonic from the red Chaos Emeralds on Thoraxia and Mammoth Mogul created a doppelgänger of Tails. In both cases, the duplicates could only exist for a limited time), Forcefield Creation (Users can project forcefields of Chaos Energy for self-defense or to trap others. While enclosed in a forcefield, users are capable of simultaneous offense and defense), and Absorption (With the energy of an abundance of Power Rings, enough to cover each arm, users can absorb energy from the opponent to transform and become relatively similar in power). A Super Form naturally grants the following abilities: Aura (Those with Chaos Energy can enclose themselves in auras of the mystical force that allow them to barge into or through enemies and attacks without being physically affected), True Flight and Spaceflight, Acausality (Type 4), Self-Sustenance (Type 3), Intangibility (Super Forms can render themselves intangible), Invulnerability, Non-Physical Interaction, and Causality Manipulation (Super Sonic, Super Shadow, and Super Silver's attacks struck and damaged Solaris throughout all points in time)

Those who can enter a Super State receive up to High-Tier Resistances offered by Chaos Energy, which grants the following Resistances: Corruption (Type 2. The Iron Queen could only corrupt Monkey Khan after the Power Ring was taken off), Mind Manipulation (A Power Ring can restore or block out manipulation to the mind), Soul Manipulation (The energy of Power Rings prevented Mogul's disembodied spirit from "dissipating into the immaterial"), Speed Reduction (The energy of three Power Rings restored Sonic's lost speed), Extrasensory Perception (Enough Power Rings on each arm had allowed users to evade Master Mogul's visualization of reality), Biological Manipulation and Transmutation (The Death Egg Mark 2's Power Ring matrix rendered it immune to the Crystalline Magic of Ixis Naugus. The energy of a single Chaos Emerald later reverted Bunnie's Roboticized limbs back to normal, and reverted mutations, Life Force Absorption, Mind Erasure and Soul Erasure, Madness Manipulation, Memory Manipulation, Power Nullification, and Poison Manipulation (Both Mammoth Mogul and Enerjak were subjected to Egg Grape chambers and resisted their effects without lasting repercussions, the latter due to the power of a Chaos Emerald. The Egg Grape chambers erases the victim's mind and soul, infuses them with toxins, and saps them of their energy, with even the briefest exposure to them causing severe dips in mental capability and driving Naugus to insanity), Magic (Enerjak's magic merely annoyed Super Sonic), Electricity Manipulation (The Thunder Arrow technique done by Enerjak was shrugged off by Super Sonic), Paralysis Inducement (Silver's psychokinetic grasp was effortlessly broken the very moment Super Scourge tried to do so), Conceptual Manipulation (Type 1), Law Manipulation, Matter Manipulation, and Reality Warping (Super Sonic and Super Armor Mega Man were unaffected by these things when the Super Genesis Wave activated during their battle)

Attack Potency: Universe level+ (Easily defeated Shadow the Hedgehog and put up a fight against Sonic) | Low Complex Multiverse level (Is empowered by the Chaos Emeralds. Clashed with Super Sonic and was implied during the event Super Sonic would not have been enough to defeat A.D.A.M. in the long run)

Speed: Massively FTL+ (Could easily react to Chaos Emeralds traveling across the universe. Kept up with Sonic) | Immeasurable

Range: Standard melee range, tens of kilometers with attacks and abilities | At least Low Complex Multiversal. Temporal Area of Effect with his attacks, which can affect beings throughout all of time

Weaknesses: Super A.D.A.M. can be left vulnerable should Tommy Turtle resist[1] his control

Getting the jump on Shadow