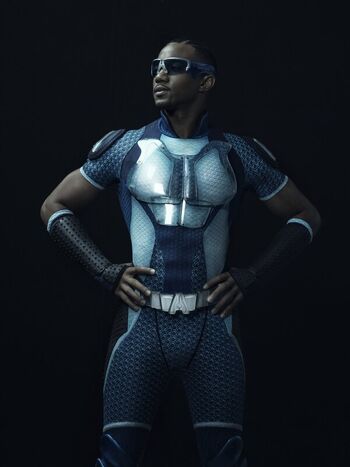 A-Train is one of the main characters in the Amazon series The Boys. He is a speedster who used to be a part of a team known as Teenage Kix but is now a member of The Seven. He inadvertently killed Robin Ward (Hughie Campbell's girlfriend) with his powers while high on Compound V, which led Hughie to join The Boys for revenge.

A-Train is a former member of The Seven and the current "fastest man in the world" but underneath the cavalier exterior of a celebrity superhero, lies the soul of a mortal athlete with deep insecurities about staying at the top. He’ll do whatever it takes to remain in The Seven because he knows it’s only a matter of time until a younger, faster challenger takes his place — and that’s a problem even the fastest man in the world can’t outrun.

Classification: Human, Supe, Superhero, Former member of Teenage Kix, Member of the Seven (Up to season 2)

Attack Potency: At least Wall level+, likely Small Building level (Slammed Kimiko through a train station wall. Broke a concrete roadblock in half just by running off of it. While amped by Compound V, he obliterated Robin's body running through her somewhat accidentally. While himself in a bad condition and moments before having a heart attack, he knocked Starlight, who took .50 caliber bullets without going through her skin, though they caused her some pain)

Speed: Supersonic (Has a explict running speed of 371 m/s, which was done after being amped by unknowns amounts of Compound V to cheat on a race. Outsped a bullet as a child. Could run at 1,000 mph and search all of Manhattan in 30 minutes. Causes sonic booms while running. Can achieve higher speeds than normal via Compound V, although his reactions aren't on the same level due to him having obliterated someone's body running through her somewhat accidentally)

Durability: At least Wall level+, likely Small Building level (While amped by Compound V, he was unharmed by running into Robin with enough force to reduce her body to bloody paste. Withstood an attack from Kimiko, though she later broke his leg with a surprise attack)

Intelligence: Above Average, helped run a secret drug trafficking conspiracy and keeps his shadier actions away from public knowledge, though mostly thanks to the company that protects him.

Weaknesses: His addictive overuse of Compound V has decreased his health, to the point where he eventually suffered a heart attack. Obsessed with staying the fastest human alive. 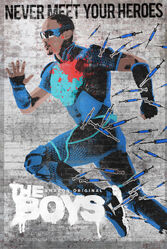 A-Train on the Season 1 poster. 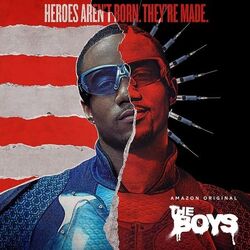 A-Train on Season 2's poster.
Add a photo to this gallery

Retrieved from "https://vsbattles.fandom.com/wiki/A-Train?oldid=7020666"
Community content is available under CC-BY-SA unless otherwise noted.