VS Battles Wiki
Register
Don't have an account?
Sign In
Advertisement
in: Tier 9, Tier 9-C, Characters,
and 18 more 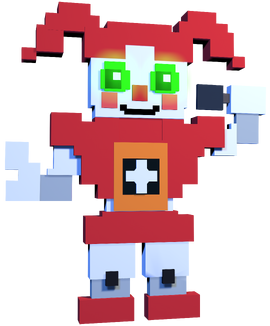 Gender: None, referred to as Female

Powers and Abilities: Superhuman Physical Characteristics, Immortality (Type 4), Inorganic Physiology (Type 2) possibly Incorporeality (Is seemingly made of game pixels), Luminescence, Regeneration (High; After being shocked, 8-Bit Baby explodes into 8-Bit particles which then disappear, although 8-Bit Baby comes back), Stealth Mastery, Sound Manipulation (Emits 8-Bit sound effects and plays music while roaming), Invisibility (via Cloaking), Illusion Creation or Teleportation via Fake-outs (If the animatronics do not decloak during charges, only their eyes appear and they vanish after reaching the player), Technology Manipulation (The player's phone produces static when hovering over the animatronic's location, Can cause the phone to glitch out temporarily (Interference), Haywires), Teleportation (Can have the Plushtrap CPU, which brings The Player to a new location altogether when encountered), Can be upgraded by feeding them Remnant, possibly Resistance to Electricity Manipulation (Via returning despite being shocked)

Speed: Superhuman (Can race around the player in an instant while keeping a distance), Higher with Servo Boosters MOD

Lifting Strength: Class 5 (Compares to Mangle and Springtrap who can tear The Player apart)

Stamina: Superhuman, due to being a robot