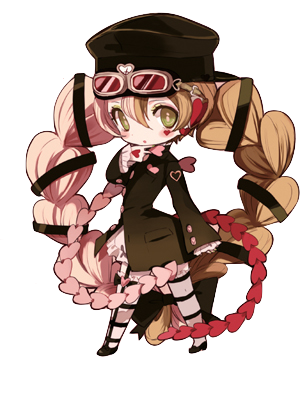 Kotori Nanaya is a magical girl in Arc 3. She works for the Magical Kingdom's Magical Girl Resources Department under the orders of Pfle, and handles the recruitment of new magical girls within the Kingdom thanks to her magic. She's a kindhearted and polite girl who likes to help and meet new magical girls for interviews.

She dislikes scanning people with her goggles without their knowledge, seeing it as rude, which sometimes leads her to a moral dilemma when she's ordered to do so by her superiors. She prefers to stay in her Magical Girl form for the mental strength boost she gets for being one since, as a human, she would retreat back to alcoholism due to all the work-related stress she endures as a Magical Girl.

Originally sent to B City by the Resources Department to interview Ripple at her request to join the Magical Kingdom, she's ordered to team up with Mana, Hana Gekokujou, Archfiend Pam, and Ripple, with the mission to apprehend a serious criminal.

Speed: At least Hypersonic+ (Even a weak magical girl can run 2 kilometers in the blink of an eye), likely far higher

Durability: Small Building level (Non-combat magical girls can get injured by mines, but not fatally)

Intelligence: Above average. From her experience, she knows how to use her magic efficiently and living as a magical girl. Very ill-suited for battle. Is usually backed-up with advice and orders by Pfle to guide her

Weaknesses: None of the Average Human weaknesses. If she becomes unconscious, she turns back into a human and loses all the magical girl advantages

Information Analysis: 7753's magic allows her to obtain information about anyone by looking at them through her magic goggles, except reflections. She can obtain the data of any people in her sight with pinpoint accuracy: name, age, strength, magic, abilities, stats, powers, weaknesses, intelligence, mental state, and much more; she can adjust the information received by adjusting the dial on them. When possible, the information she obtains can be quantified, represented by heart symbols that appear in her vision; the higher a stat, the more hearts will appear. After being modified by Shadow Gale, her goggles can perform more functions, such as getting more detailed information on the opponent and in larger quantities, automatic data transmission to her superiors, sharing senses with them as long as she has them on, instantaneous communication, and erasing the existing log. If she removes her goggles before canceling her transformation, they will remain and can still be used. Other Magical Girls can use the goggles, but they won't be as proficient with them as 7753 herself.