VS Battles Wiki
Register
Don't have an account?
Sign In
Advertisement
in: Tier 4, Tier 4-C, Tier High 4-C,
and 36 more 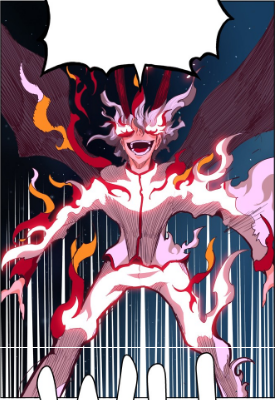 666:Satan, often referred to simply as Satan, is a denizen of the Heavenly Realm who seeks to succeed his mentor Beelzebub as the master of the First Heavenly Realm. Although child-like in appearance, he boasts monstrous power and proves to be one of the greatest threats to the heroes when the gods descended upon Earth.

Name: 666:Satan, White Kid, The Champion Among Gods, Whitey, The King of Gods

Superhuman Physical Characteristics, Longevity, Telekinesis, Master Hand-to-Hand Combatant, Gravity Manipulation, Air Manipulation, Flight, Non-Physical Interaction, Extrasensory Perception, Enhanced Senses (Satan sees people as an abstraction of their power level), Fear Manipulation (Can instill a sense of fear and dread with his presence against beings weaker than him), Duplication (can create 2 quintillion clones. Later demonstrated the ability to create 245 quintillion clones), Telepathy (Can read his foes' minds in order to copy their techniques), Power Mimicry (Can copy any technique or ability he sees or reads from his opponent's mind, copied Daewi Han's Planet Toss and Mori Jin's cloning ability), Reactive Power Level (Re-Taekwondo changes the power level of its user), Body Control (Can completely turn his head around, Wing Manifestation), Energy Manipulation and Absorption (Can absorb light and heat from his surroundings to empower himself and use it against his foes), Regeneration (Mid, quickly recovered after Mori completely dismembered him), Immortality (Types 1, 2, 3 and 4), Acupuncture and Statistics Amplification via Na Bong Chim Limiter Removal (can boost his power by 250,000x), Resurrection (Has one life for each of his horns, which can resurrect him if used before death), Invulnerability (The Taboo placed on humans made it impossible for them to harm divine entities), Law Manipulation (Gods can form contracts that prevent other species from harming them), Self-Sustenance (Type 1 & 2), Resistance to Power Absorption, (Held himself back against Mori even though he became Ultio's Borrowed Power), Fear Manipulation (Was unaffected by Mori Jin's presence)

Attack Potency: At least Star level (Casually tossed Jupiter from orbit towards Earth in a short time frame, Beelzebub stated that 666:Satan defeated him to become Master of the First Heavenly Realm, could fight equally with an angry Mori Jin and a serious Daewi Han, despite not displaying even a portion of his true strength) | At least Star level (Stronger than base), up to Large Star level with Jeahbongchim Acupuncture and when empowered by heat | At least Large Star level, (Presumably superior to his previous phases), Solar System level with Jeahbongchim Acupuncture (Should be comparable to, if not stronger than Mori after his use of the ability) | At least Solar System level (Trained during the 17 years since Ragnarok, and was capable of giving Mujin Park trouble before he entered his higher Phases), higher in Phase 2, Phase 3, and with Jeahbongchim Acupuncture (Put up a much better fight against Mujin than Mori Dan did)

Lifting Strength: At least Class Z physically (Physically comparable to Mori Jin and later lifted half of Yeoui with no effort), Class Y with gravity manipulation (Can move Jupiter)

Stamina: High (Clashed with Daewi with no apparent effort and outlasted even the likes of Mori, albeit while the latter was using a great deal of power by creating hundreds of clones)

Intelligence: Although Satan seemed levelheaded at first, he was soon revealed to have a great love for battle, letting Mori rest for a short period before their battle to have a more stimulating fight and taking great pleasure in both dealing and receiving pain. He is a master of hand-to-hand combat, easily matching Mori blow for blow and maintaining the upper hand for much of their fight. Additionally, his ability to read his foe's mind allows him to quickly analyze and use their techniques against them, making it difficult to surprise him with new techniques. However, his lust for battle can make him short-sighted, as he relished in the powers he received from Mori and was subsequently paralyzed by Mori's use of acupuncture followed by the flurry of Taekwondo attacks that followed. Additionally, he has a severe inferiority complex and need to prove himself due to the gods of the Heavenly Realm's tendency to compare him to the Monkey King, and takes great pride in his status as the Champion of the Gods.

Weaknesses: Satan loves a good fight and often makes questionable decisions to get a better one. Has a severe inferiority complex towards the Monkey King and is incredibly prideful as the Champion of the Gods, His ability to mimic other's powers does not seem to extend to equipment, as he did not bother to try to copy the Ruyi Jingu Bang or the Robe of the Sage. Additionally, he hasn't shown the ability to alter his body structure to match the passive or innate abilities of others, as he was still overwhelmed by Jin Mori after using Na Bong Chim Limiter Removal to the same extent as him.

Satan: 666 has some combination of copying and mind reading, allowing him to copy all the abilities of his opponents before they have used them.

Note: As detailed in the abilities section, Satan has several abilities that increase his physicals, abilities performed in these circumstances will be marked.

Note: Satan breaking Yeoui in half was done after Mori had expanded an immense amount of power to kill the Gods. It was even noted by Mori that the Gourd cracked and shattered due to over-usage when he used it, Yeoui, and Geundoowun to perform the former feat. As such, Satan does not scale to the full durability of Yeoui.