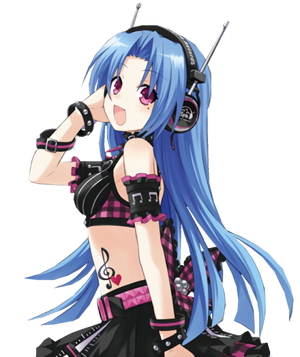 5pb. is a really talented and popular idol from Leanbox. While on the stage she looks bright and full of energy, but her true personality is completely different. She is a very timid and shy girl who suffers from confidence issues, who acts awkwardly around others and is usually very soft spoken.

She has been trying to help Leanbox's CPU, Vert, in the 3 years in which she has been held hostage by ASIC, trying to lower their influence over the nation.

Attack Potency: At least Town level, possibly Small Planet level (Slightly weaker than the CPU Candidates such as Nepgear) | Universe level+ (Fought against CFW Magic with other Makers like IF)

Cube (Live a Live) Cube's Profile (The battle took place in Lucretia, and speed was equalized)