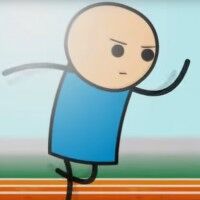 The 50 MPH Man was a character originating from Cyanide and Happiness. One day when waiting for the bus he discovers that he has super speed and decides to use his power to make a name for himself.

Attack Potency: Athlete level, Street level with a gun (Seems to have a pistol which are generally that level) and Wall level with a full speed tackle (Can generate this much energy)

Speed: Superhuman (Can run at least 50 mph, outran cop cars for a short while)

Retrieved from "https://vsbattles.fandom.com/wiki/50_MPH_Man?oldid=7037477"
Community content is available under CC-BY-SA unless otherwise noted.