It was also used on many auxiliaries, merchant vessels and smaller warships as well as on US Coast Guard vessels. This standardization, unique in any navy, greatly helped the logistical supply situation of the Pacific War. United States naval gun terminology indicates the gun fired a projectile 5 inches (127mm) in diameter, and the barrel was 38 calibers long, making the 5"/38 dual purpose midway in barrel length between the 5"/51 surface-to-surface and the 5"/25 anti-aircraft guns. The increased barrel length provided greatly improved performance in both anti-aircraft and anti-surface roles compared to the 5"/25 gun.

Durability: At least Wall level, at most Building level with biggest turret mount in terms of total destruction (Comprised of up to 79,210 kilograms of steel with a fragmentation energy of 2.1 gigajoules)

Range: Up to over 16 kilometers (AA ceiling of just under 12 kilometers)

Note: Similar naval guns of about the same bore (120-130mm) and period generally have performance equivalent to this one. 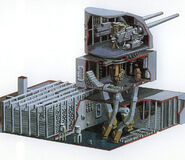 Internal workings of a twin 5" gun mounting on the Iowa-class
Add a photo to this gallery
Retrieved from "https://vsbattles.fandom.com/wiki/5%E2%80%9D/38_caliber_Mark_12_gun?oldid=4992562"
Community content is available under CC-BY-SA unless otherwise noted.