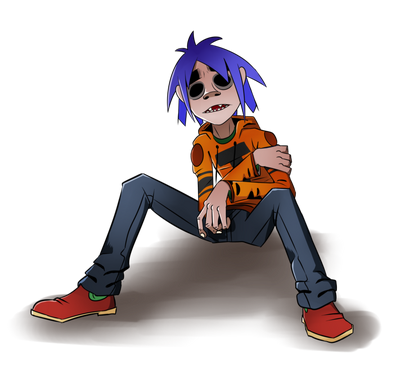 2-D has big hands and long fingers. He is lanky, standing at 6'2", and has no pupils in his eyes. The reason he looks like this is because of his 8-ball fractures, where the iris of his eye filled with blood. He has naturally blue hair resulting from when he fell out of a tree at age eleven, causing all his hair to fall out and grow back a deep azure blue. His hair used to be brown.

Like Noodle, 2-D's looks have evolved heavily throughout Phases 1, 2, and 3. In Phase 1, 2-D is seen with very geometric, and almost purple hair at times, unlike in phase two, where his hair has seemed to gain a more realistic, lined tone and turned to an almost teal color, In Phase 3, 2-D is seen with much more realistic hair, larger eyes, and more tanned skin. Further, his shape in Phase 1 was almost ruler-straight; in Phase 2 and 3, he seemed to gain some tone and shape and wrinkles, giving him more of a 'hippy' look, compared to his Phase 1 appearance. 2-D's speaking and singing voice have also deepened from Phases 1 to 3.

Despite missing his two front teeth, 2-D can sing clearly. His speech, while still mainly clear, has a definite Cockney (or thereabouts) accent: he says "summfink" instead of "something", and "fing" instead of "thing." His singing voice has become deeper since the first album. 2-D is considered the 'pretty boy' and frontman of Gorillaz.

Powers and Abilities: Superhuman Speed and Strength, Master Hand-to-Hand combatant, Can produce light from his eyes

Attack Potency: Wall level (Physically on par with the rest of his bandmates who could combat a pack of gorillas and could survive a small missile explosion)

Speed: Superhuman with Subsonic reactions (Dodged pool balls traveling fast enough to create several afterimages and is on par with Murdoc who can control a car fast enough to drive upside-down, and Noodle who can react to long-range gunfire)

Durability: Wall level (Can handle abuse from Murdoc and Russell, his bandmates)

Weaknesses: He keeps to himself a lot and takes abuse without fighting back most of the time

Retrieved from "https://vsbattles.fandom.com/wiki/2D?oldid=7003239"
Community content is available under CC-BY-SA unless otherwise noted.