VS Battles Wiki
Register
Don't have an account?
Sign In
Advertisement
in: Tier 6, Tier High 6-C, Characters,
and 31 more 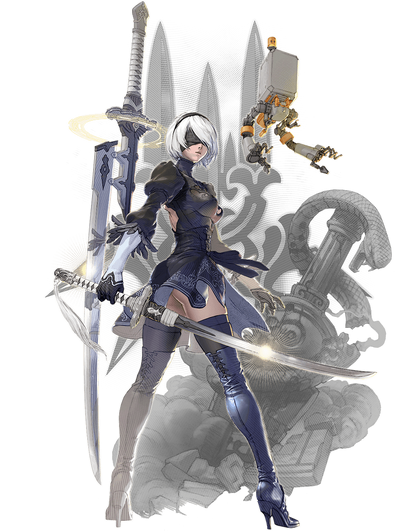 YoRHa No. 2 Type B also known as 2B is a guest character for Soul Calibur Vl. How she ended up in the Soul Calibur timeline (or whether she was sent back in time) is unknown. When she was granted the mission to "Destroy the hostile entity, Soul Edge", 2B accepted the mission despite not knowing what this entity was, however, she was struck with a sense of unease.

Powers and Abilities: Superhuman Physical Characteristics, Flight (Via Flight Unit), Expert user of close range weapons and martial arts, Telekinesis (Can move her weapons and even wield Engels arm as a weapon), Regeneration (At least Low, higher, possibly High-Low over time; via nanomachines), Immortality (Type 8; Cannot die as long as her memory data exists in the YoRHa Network), Resurrection (Should the active body be destroyed her memory data from the YoRHa Network will automatically be put into a replacement body), Heads-up display on the combat visor (With minimap, enemy location, data on enemies, various other information), Shockwave Creation, Statistics Amplification with Soul Charge, Potential Instant Resurrection (Each body has a 50% chance of reviving in top condition after being killed), Afterimage Creation and Teleportation, Explosion Manipulation With Type-3 Sword and Type-3 Blade, Homing Attack with Pod, Energy Projection with Pod, Barrier Creation, Information Analysis, Manifestation of Weapons and Chains, Hacking, Stealth Mastery (Can set up radio wave camouflage), Self-Destruction, Gravity Manipulation

Attack Potency: Large Island level+ (Treated as a rival to Ivy Valentine and thus should be comparable to her)

Intelligence: 2B is a highly skilled fighter who has shown to be able to combat countless powerful machines at once and can keep pace with the Soul Calibur cast without any issues.

Weaknesses: As an android, she is vulnerable to electromagnetic waves and viruses. Also, she can theoretically be hacked. The body she is currently in dies if the OS chip is removed.